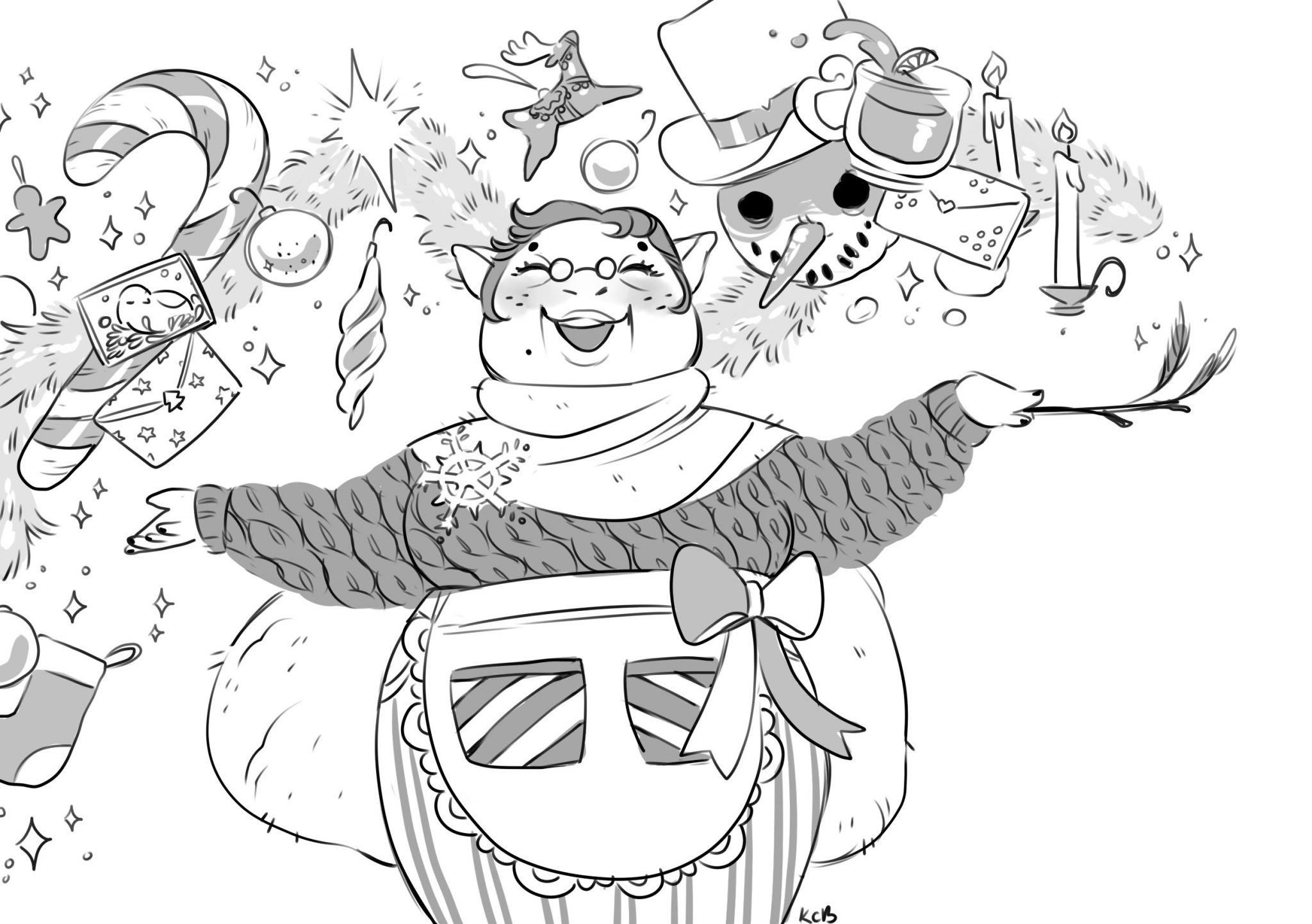 During the festive period, all spellcasters can use these spells in place of their own – it’s just that magical a season! To do so, roll on this table to generate a result instead of preparing a standard spell. Once you’ve successfully cast a Festive Spell, you can treat it as a spell you know until Spring. (Optionally, during the festive season, roll a D6 for each spell a spellcaster prepares during a rest period – on a 1, it’s replaced with a random spell from this list when cast. Being suitably festive can remove this penalty.) If it comes up, all spells are level 1.

1: ANIMATE TINSEL. Allows the caster to animate and control tinsel as well as modify its colour, texture, shine and so on. Every time you cast this spell, your mastery of tinsel increases. Should you use this spell in combat (perish the thought) the tinsel inflicts D3+X, where X is the number of times you’ve cast this spell, and as it’s a magical effect it ignores Damage Reduction.

2: BAUBLE OF WONDERMENT. Conjures a beautiful bauble of spun glass that entrances and fascinates the viewer (Will save vs your spellcasting ability), filling them with festive cheer. If broken or pierced (on a critical fail whilst holding it, or can be done so deliberately) the bauble bursts in a dazzling spray of light (easy Dex save to avoid temporary blindness to anyone within 10ft).

3: GUIDING STAR. Marks out a star in the night sky that guides the caster towards their intended target; it doesn’t actually change the star, just their perception of it. Roll with Advantage on Navigation checks assuming you’re looking for something spiritually important or mentioned somewhere in prophecy.

4: DECK THE HALLS. Instantly decorates a 40ft x 40ft area in festive trimmings – tinsel, holly, candles, baubles, bunting, mistletoe, socks on the walls, roaring fire in the fireplace, monogrammed pajamas, you name it. These decorations last until the next morning – when dawn breaks they will crumple into dry, tattered paper and blow away in the slightest breeze.

6: CHANGE OF HEART. Target makes an average Will save vs your spellcasting ability or is struck with the true meaning of the festive season. This differs from target to target, and if they don’t recognise a “true meaning” or don’t understand the festive season, they take D8 psychic damage from conflicting information and their nose starts to bleed uncontrollably.

7: SUMMON MASSIVE CANDY CANE. The cane is about eighteen inches long and surprisingly heavy. Makes an excellent present for children, and functions as a D4 Bludgeoning weapon. If you roll a 4 on your damage dice, it inflicts double damage and then breaks into pieces.

8: STONE TO GINGERBREAD. The most reliable way to make a Gingerbread House. Turns a stone or brick wall into architectural gingerbread – tougher than usual gingerbread, but significantly softer than stones and much tastier. Also turns mortar into icing and windows into melted-down boiled sweets.

9: MAGIC MISSIVE. Conjure D6+Level cards featuring a fat robin, a cosy-looking cottage, deer, holly, and the like. Each card comes with an envelope and, when inserted into an addressed envelope and thrown into the wind, it will magically travel to the intended recipient.

10: ANIMATE SNOW GOLEM. Snow isn’t the most sturdy material to build a golem from, but it’s abundant and teaches us a powerful lesson about impermanence. This spell allows you to confer sentience, animation and a pretty good singing voice on a humanoid statue made out of snow assuming it has a hat. The snow golem is broadly loyal to you, and is aware – some might say upsettingly aware – of its own impending mortality, so will undertake dangerous tasks that other servants might balk at. (Snow golem has stats as Skeleton, complete with resistance to Piercing and Slashing weapons, and carries whatever weapons you give it. Any fire-based damage it suffers is doubled.)

Next: D10 Festive Drinks and Snacks