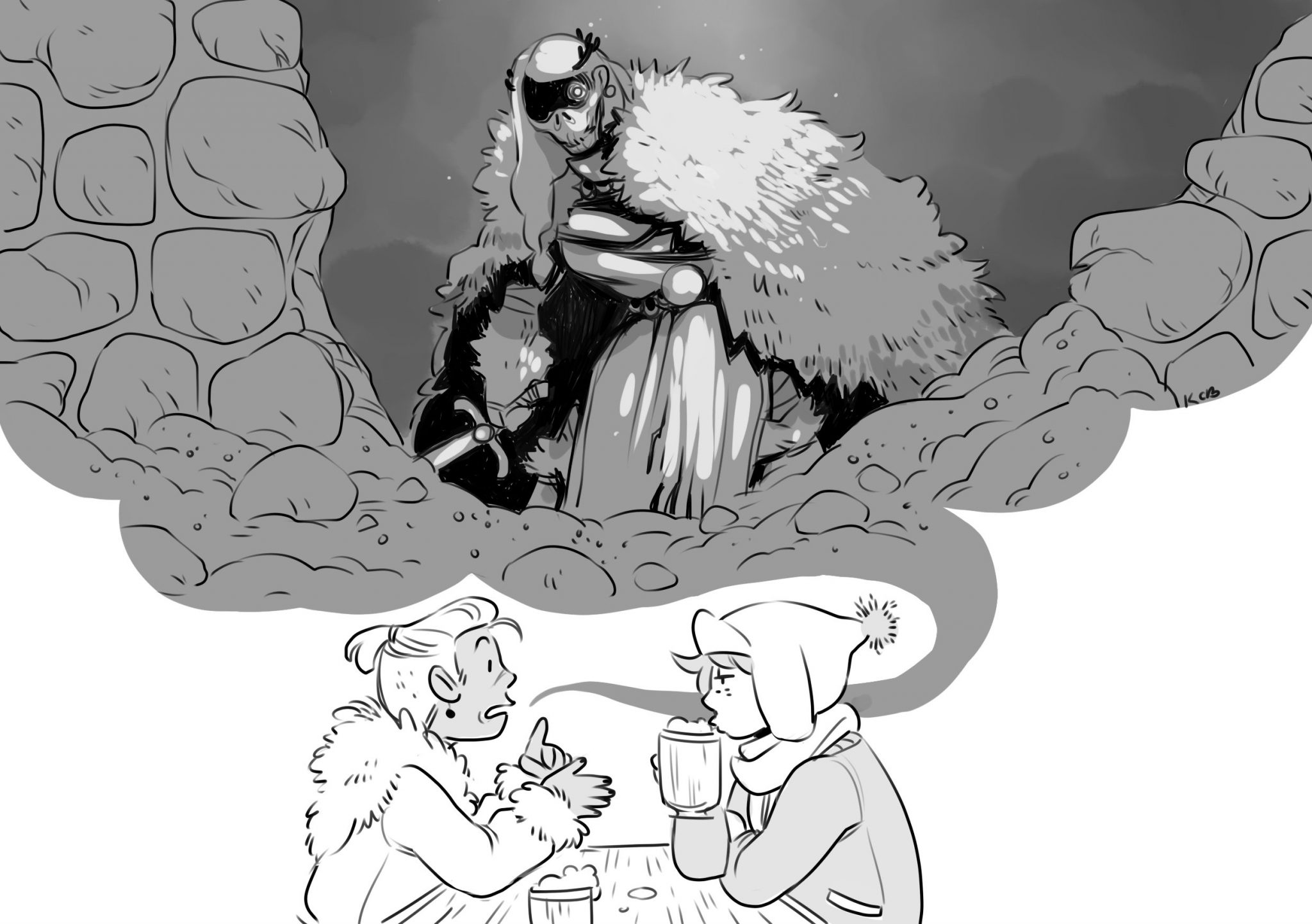 1: Up in SELWERD, where they make bad sausages and terrible husbands – according to the innkeeper – people have started digging into the snow with bare hands in search of the “singing.” The innkeeper says it’s typical Selwerd rubbish and they should spend more time slaughtering their hogs properly, but you’ve heard trappers and merchants whistling some strange new tunes on market day these last few weeks. Maybe there’s something in it.

2. HAMMERUM is a fairly grim fishing town up on the northeast coast, not too far from Bostivol, and you hear that the people there went weird after seeing the northern lights in the night sky. They built loads of pillars out of snow, right in the centre of town, some leaving their boats untied to drift out to sea. They stuffed dead birds into the pillars, too, dozens of them; and it’s at this point that you stopped believing the kid from Hammerum who comes down the coast to sell fish and told him to stop telling tall tales.

3. RINDSOLM, part of Dovescopp, has a monastery devoted to a god that no-one cares about tended to by a handful of wizened priests and attendants. There used to be a nunnery there, but they had a falling out with the monastery and it caught fire and no-one talks about it any more. But: this trapper Fredrik passes through Rindsholm to pick up some beer on occasion (the monks brew it, and it’s godawful, but it’s cheap), and Fredrik says that the monks were all entirely naked, wrapped around each other in the courtyard, frozen to death. Fredrik talks a lot of bollocks to try and get a free drink, but this time it seems like he might believe what he’s talking about.

4.  Up in TVERSTED, they uprooted the big tree that – as it turns out – was holding up half of the mountainside above the town. Huge rockfall, couple of houses destroyed – and you’d think they’d know it was a bad idea. Half of the men in the village went down into a great hole under the tree in search of treasure they all knew was there; that was a week ago, and none of them have come back since. Their spouses are doing a whip-round to afford a team of adventurers to go down there and get them back, but they’ve had no takers as of yet.

5. In BRUSUND, they found the body of an ancient warrior beneath the floorboards of the burgermeister’s house – and she’s been asking to leave. It all started when they were digging out yet another basement down there and some of the labourers heard voices; they got the priests in, did a bit of scrying, and found the corpse of someone who’s claiming they’re a warrior queen. (They might be, but there’s no local record of anyone noteworthy sharing her name – Helsdottir – so maybe take it with a pinch of salt.) Anyway: she’s furious that she’s been unearthed and wants to go north to meet her husband, who is very likely also dead at this point (but potentially less talkative). Pretty soon the poltergeist activity is going to be impossible to ignore.

6. No-one’s stolen the presents under the tree in VISUND. Normally, see, they leave presents out there for the fair folk – little bits of arts and crafts, maybe a little honey, paper flowers, that sort of thing – and they’re taken overnight, and none of the children get stolen from their beds. But this year, no-one’s taken them. And a couple of kids have gone missing – maybe? It wasn’t entirely clear. Might be best to check it out.

7. You’ve heard rumours about the Deeps – semi-abandoned, semi-dilapidated tunnels with pockets of backwater isolationist dwarves throughout – near ROSVOL, a handful of farms built around an ancient and crumbling windmill. The normally elusive dwarves have taken advantage of this year’s poor harvest to trade food (mushrooms mostly, some awful dried cave fish) with the desperate inhabitants in exchange for parts from their windmill. Now the people of Tosvol can’t sleep because of the mechanical grinding coming from underneath the settlement; and one dwarf, whose common isn’t particularly good, is asking where they can buy “God parts.” Perhaps they’re trying to build a church? You hope they’re trying to build a church.

8. They’re an odd bunch in WISTHOLM; even the other monks in Dovescopp avoid them. But you receive a wedding invitation indicating that the High Priest of the monastery there is intending to marry the North Wind to broker a peace between the world of mortals and the realm of the elements, which is a terrible idea but he’s refusing to listen to detractors. Next week at noon he’ll stand, withered and sky-clad and daubed in sacred symbols, and it will all go terribly wrong as the North Wind takes him as her husband and blows everything to pieces.

Previous: D8 Winter Festival Games
Next: D8 Slumbering Creatures That Have Awoken With The Coming Of This Dreadful Winter