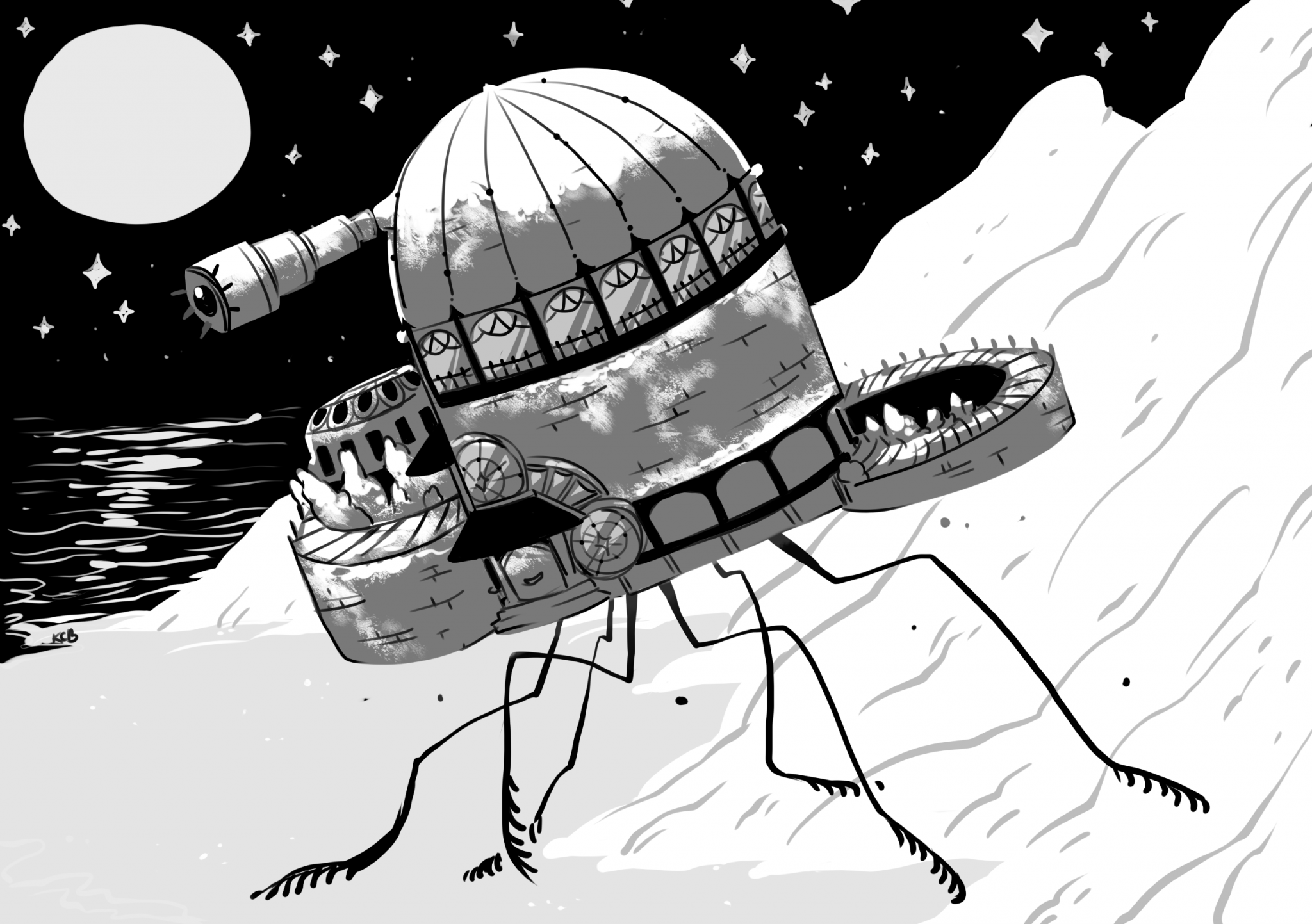 1: DOOM ELVES. Doom Elves are a naturally-occurring phenomenon that appear when something absolutely terrible is about to happen; they emerge from somewhere, newborn and fully-grown, and observe it happening. They are scholars of misfortune and tragedy. They write down events in great books bound with leather and slate in a tiny font produced by puncturing their ink glands with their nib-sharp fingernails and scratching it out on the page. Doom Elf libraries – accessed by opening any suitably grand door with the key hanging around the neck of every Doom Elf – have a wealth of information on a wide variety of apocalypses. But they seem unwilling to give up the key, and that ink also functions as a powerful neurotoxin. [Medium Fortitude save or take 2D6 damage on a successful attack.]

2: GODLING SWARMS. Gods come from the old places – the deep forests, the caves, the crevices where light is scared to shine and time slows until it’s molasses-thick. When people visit these places (and they really oughtn’t if they know what’s good for them) sometimes godlings – tiny parasitic aether-entities, barely real in any given universe, let alone this one – latch on to them like leeches, give them funny ideas about the meaning of life and how we should treat one another, and before you know it you’ve got a full-blown religion on your hands.

But: something’s driven them out of those ancient places, and now they’ve gathered together for mutual protection and are stumbling through the foothills and woods in vague humanoid shapes. Unobserved, they’re invisible – observed, they flicker into the appearance of whatever they reckon will be most impressive to the viewer. They’re not very good at it, and some nights the outskirts of Bostivol and Dovescopp are lousy with animal-headed wretches stuttering from one avatar to the next in a frantic attempt to find a believer or two. [Easy Will save (medium up close, hard if you’re in arms’ reach) or become infected with the seed of a new religion.]

3: FIRE TROLLS. Waiting – writhing – cursing one another, and the thoughtless god that made them – in the depths of the earth, near the molten core, in a world of smoke and darkness, huffing on sulphur to survive. These slug-like creatures have blood of molten stone and, like cicadas, bury themselves beneath the earth and surface only occasionally to mate. Unlike cicadas, they’re each the size of a horse, and they’re so hot you can’t come within a few yards of them without catching fire – and they’re fully conscious and furious for the duration of their imprisonment under the earth.

Once it gets cold enough on the surface, they’ll climb up through winding tunnels, find one another, mate, and then die after disgorging their horrid larvae back down the way they came. This sets everything around them on fire and leaves them as statue-corpses wracked in coital tension – neither of which do much for property prices in the region. This year – the first time in centuries, you believe – it’s cold enough for them to clamber up to the surface world.

4: YETIS. Yetis celebrate the Festive Season too, and they normally keep to themselves and make do with gutting musk oxen and standing on mountaintops instead of coming into areas inhabited by non-yetis. But this year their celebrations seem to be falling earlier than usual (it’s based on ambient temperature rather than date, yetis round these parts don’t belong to a calendar-focused culture) and the animals they’d hunt to give away to one another are nowhere to be seen having fled south earlier in the season. Confused and desperate for gifts, yetis are raiding farmsteads for anything that could be classed as a present – cows, pigs, wagons, things that are on fire, chimney stacks, a shed, etc.

5: GIANT MAMMOTHS. Really giant mammoths, too. They’ve got backs broad enough to build a small village on, tusks that could overturn a farm in a matter of seconds, and when they walk the ground shakes. The druid visiting town believes that they evolved to survive and prosper in an incredibly cold environment, but – until now – the only place cold enough for them to live was around the peak of Svartfjell. With the advent of this particularly grim winter, they’ve been able to come down the mountain and eat all sorts of interesting new things like trees, houses, and the occasional person. They’re far too big to fight; you might as well try to stab a house to death.

6: ICE ELEMENTALS. The Ice Elementals of the Northern Kingdoms, and of Svertfjell in particular, are a proud and noble folk with complex, multi-layered etiquette and ritual practices taught to one another in their reverberating, haunting voices. Their jewelry is especially beautiful – made from captured weather patterns bundled into everfrost, each year’s winter is its own unique vintage and refracts light in a particular way. They are keen to establish an embassy down in the lowlands to encourage trade with the people there, and offer their mastery of frost and ancient creaking-ice poetry in exchange for establishing transit routes and – maybe? – marrying off a princess or two to cement the allegiance.

Unfortunately, the tallest known Ice Elemental to date is 9 inches tall, as a result, and no-one takes them seriously.

7: CRYSTALLINE ROCS. Great fractal birds made of hollow crystal bones and thousands of razor-sharp glass feathers that swoop almost invisible through the sky. Crystalline rocs are rarer than most beasts round these parts and prefer to sit in quiet contemplation of a thousand thousand sunsets atop mountain peaks, so if they’re moving south, you know that something’s up. The first sign that a roc is above you is the low drone of the wind rushing over their bodies and reverberating through their bodies; the second is a loose feather tumbling from the sky, scything clean through anything foolish or immobile enough to be underneath it, and smashing to pieces once it hits the ground.

8: WITCH SUMMER HOUSES. And: outhouses, observatories, etc. There was a fashion a while ago for witches to put great big legs on the bottom of their houses so they could stomp around to be wherever they needed to be. Even seasonal places of residence or specialised buildings were retrofitted with unnecessary legs – often bird-themed, but sometimes they looked like stag limbs, octopus tentacles, spider legs, and so on. Now, with the coming of the coldest winter in living memory, dozens of these mountain residences are blindly fleeing the blizzards of their own accord. Their legs don’t quite work properly due to poor maintenance and the cold, so they’re unstable on their many feet, and it seems like some of them are trying to steal parts of other houses for repairs, or food, or maybe just out of spite.

Previous: D8 Rumours from Afar
Next: D12 Things the Doomsayers are Yelling in the Town Square

5 thoughts on “Adventure Calendar Day 11: D8 Slumbering Creatures That Have Awoken With The Coming of This Dreadful Winter”