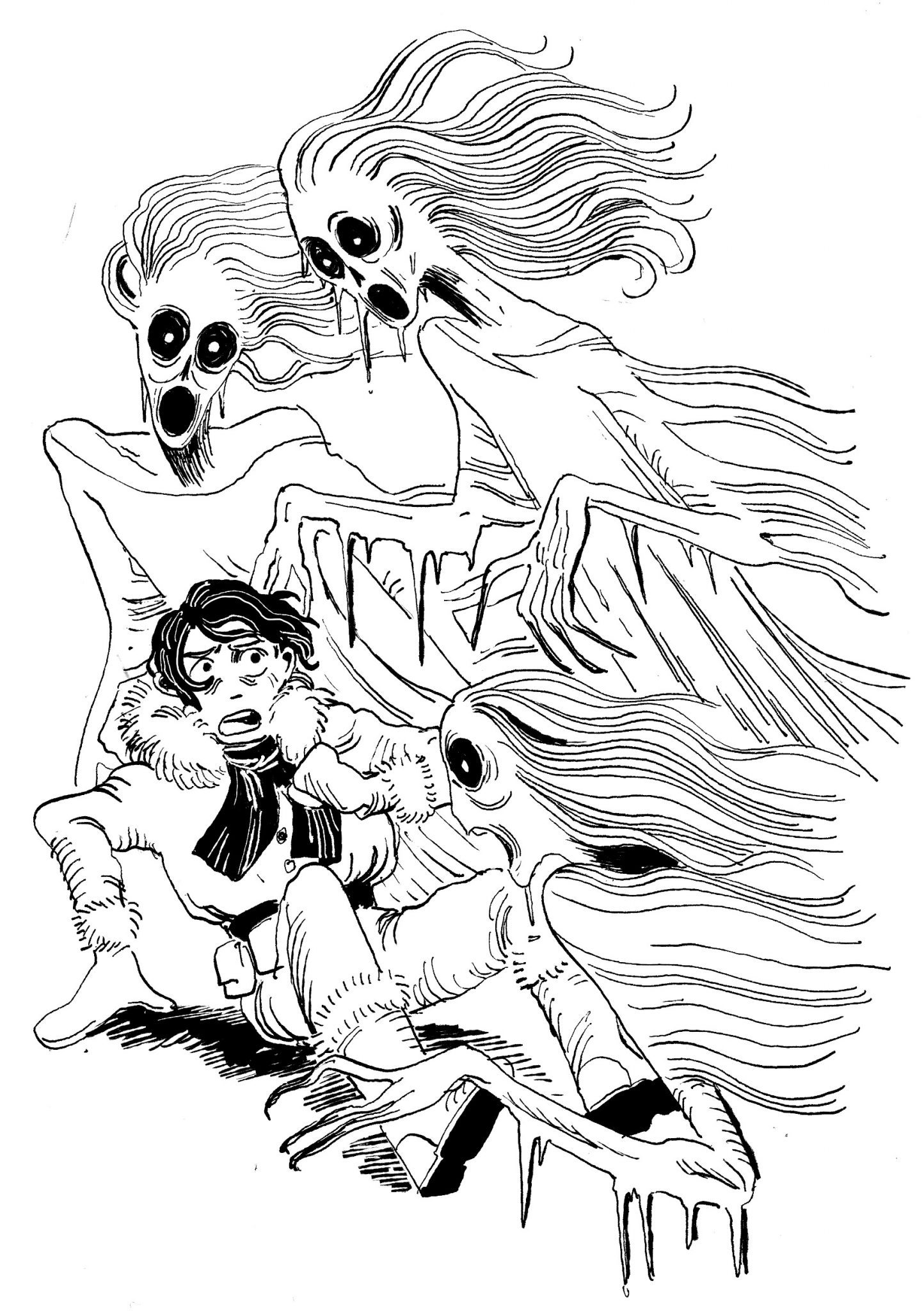 1: SICKLY MIMIC. The north used to be full of dungeons back during the Second Lich Period – no end of undead magicians made their homes here and used their mouldering armies to conquer nearby towns and villages, repair damaged buildings, and improve regional transport infrastructure. Adventurers arrived in force, which triggered the end of the Second Lich Period as they killed all of the Liches, but their dungeons (and weird genetic inventions) remain to this day.

This one is a mimic that looks to have been malnourished as an infant and not properly trained in transformation by a parental figure, so while it’s doing its level best to look like a chest full of gold and jewels it isn’t really pulling it off. Other things it attempts to look like are: a nice warm fire (the flames look like painted tinfoil), a rescuable princess (face is on sideways, wrong number of legs) and a Sunday lunch (roast chicken the size and shape of a large dog, all cutlery is spoons).

2: JUDAS HUMAN. Wolves tend not to hunt people, but times are tight. Kenning-Wolves sneak into the houses of desperate inhabitants and coerce them into helping with their scheme – gain the attention of someone tasty-looking, lead them into a copse of trees just outside of the village, and watch as they’re torn apart by the pack. It’s a fair deal – the wolves give their pet person meat from their non-humanoid kills, which is becoming increasingly hard to come by. Plus, the wolves are good at sniffing out someone who carries a lot of grudges and wouldn’t mind having a pack of wolves on hand to tear apart those who have wronged them in the past.

3: ICE GHOST. If you die from the cold, you come back as an ice ghost. Unlike most ghosts who often have complex and multilayered requirements to put them to rest, ice ghosts have a pretty straightforward motivation – to get warm. Fire no longer works for them, and their ethereal bodies don’t produce heat on their own so no matter how much they bundle up they’ll never get warm – instead, they have to leech warmth from the bodies of people and animals foolish or curious enough to come near. Depending on how long a ghost suffered before it died, it’s actually relatively straightforward for them to move on to the next plane of existence; there’s a folk song about a woman who brings Bad Men to his dead lover’s ice ghost so he can rest. There are five verses, and three victims total, so helping them isn’t entirely out of the question as long as the song’s accurate.

4: DIFFICULT WINTER SPIRIT. There are legends about this sort of thing all over the province – a beautiful, pale-skinned, feminine ice-spirit meets a wanderer in the countryside, they have an exchange of some kind, and the wanderer ends up dead. Sometimes you have to tell them you’re pretty or they stab you; sometimes you have to look at but not speak to them or they shove you down a ravine; sometimes they give you a baby that attracts snow so quickly it buries you; sometimes you have to give them hot water if they ask for water because if you give them cold water you die. It would appear that these different stories point to either lots of different ice spirits with different rules, but in fact there’s only one of it and it just likes being difficult to give it an excuse to kill people.

5. TREE MOTHER. It’s considered traditional to descend into the dark forests and catch wily and recalcitrant trees for display during the Festive season. This tree – this especially large, ancient and gnarled tree – is out for revenge. Someone in town has taken her favoured child and she means to steal it back and kill anyone responsible for taking it. She doesn’t move, per se – it’s more that she appears exactly where she needs to be, when unobserved. Occasionally she’ll attack by manifesting a dark-wooded branch directly through someone’s chest. The snowstorm that picks up as you approach her stings the eyes, so she has a chance to relocate when you blink. [Hard Fortitude save to keep your eyes open in a snowstorm; on a success, she can’t move for a minute or so.]

6. A FRIENDLY SNOWMAN. What fun! Some local children look to have built a jolly snowman on the edge of town. It’s got everything you’d expect from a snowman – a strong three-segment body, a battered but respectable hat, and a big pointy nose which you presume is a carrot. In fact, the buttons on its chest look like they’re made out of gold coins! However, when you get close enough to steal them, the horrible ruse is revealed – in fact, local goblin scallywags have built it, and they’re hiding in trees and under snowdrifts around it ready to leap out and mug you for whatever you’ve got in your pockets. There’s one hiding in the head, too, which explains the nose.

Previous: D6 Travellers from Abroad Who Probably Want to Hire You, An Adventurer
Next: D8 Concerned Villagers

2 thoughts on “Adventure Calendar Day 14: D6 Things You See On The Outskirts Of The Village”