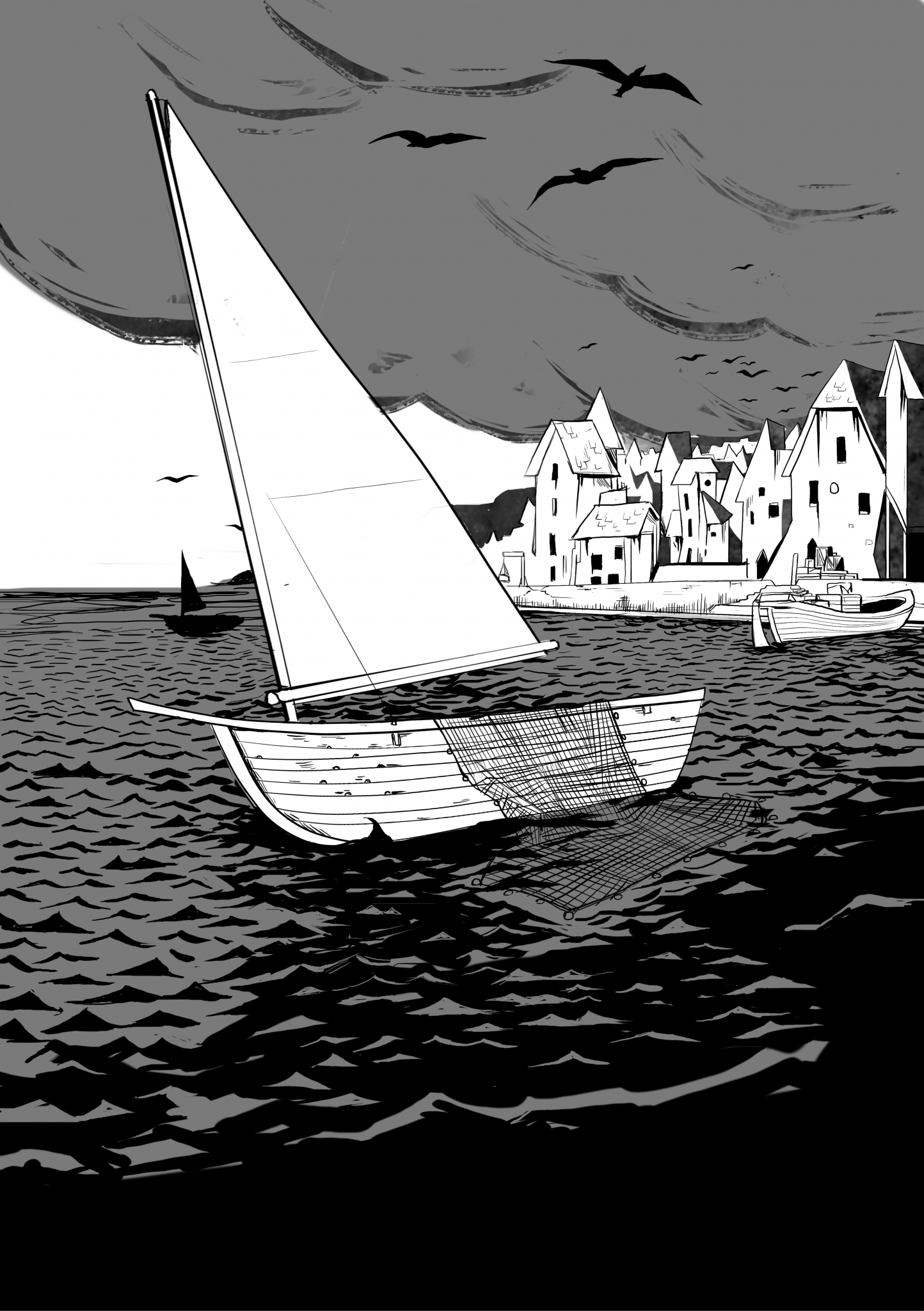 If you’re in need of a spark for an adventure during the festive season, roll on the following table. (It also doubles as a useful description of the major locations in the campaign, which is nice.)

1: SVARTFJELL, a cluster of towering and intimidating mountains to the north, with scattered, insular settlements often made up of a single family and a few hangers on. Folk here are even more superstitious than normal, and that’s saying something – there’s a difficult etiquette to grasp when it comes to talking to them, as they refuse to speak certain words in sight of the mountains for fear of angering them.

In a surprising move, hunters from the region are requesting assistance from people down south to help catch the vast herds of reindeer and moose that are moving through the woodlands. What’s got them spooked?

2. BOSTIVOL, a riverport town to the east, which is famous for exporting dried fish and absolute bastards. “A Bostivol Handshake” is common parlance for a surprise punch to the back of the head, and despite catching and selling the majority of the fish in the area, it remains a run-down and hopeless berg rife with infighting and ancient, poorly-understood family rivalries. They maintain a broad polytheist view, worshiping any river or water deity they can get their hands on, and the dock is clogged with carved votive offerings to bring in a good catch.  There are plenty of folk tales of Bostivolians interbreeding with mysterious fish-folk from under the sea, but none of these are true, and that’s just the way they look and smell naturally.

A polytheistic fish cleric staggers into your town as autumn is fading into winter; he complains that the river is freezing over sooner than expected, and that the votive offerings aren’t helping. He’s offering coin to those willing to accompany him to the source of the river up the mountain to discover what’s going on – and the less you mention to the other Bostivolians about this, the better.

3. THE BONE STEPPES, named after the ancient skeletal remains of giant creatures that dot the landscape, are largely inhospitable due to the rocky ground, thin soil and packs of vicious predators that haunt the place. The people throughout this southern region are scattered and for the most part nomadic, occasionally setting up meets in the larger carcasses, and are experts on tracking the movements of the stars and winds to navigate this otherwise trackless and desolate area. Their gods are just as portable as the rest of their lives, and each family carries a devotional shrine to their favoured star-god from camp to camp.

A traveller from the north is making their way down to the steppes, and needs protection from bandits and wild animals en route to the yearly meet in the carcass of a great fallen wyrm – they have vital information to relay to the tribal elders.

4. DOVESCOPP, to the west, has a strangely calming air to it – the gentle rolling hills, the flocks of birds in the sky, and the many picturesque lakes make it a place suited to tranquility, which explains the large number of convents, monasteries and zen retreats spread throughout the area. Each hermitage has a “patron” bird that favours flocking and nesting around the building – they don’t get a choice in the type of bird, and there’s nothing that undermines the serenity of a week-long vow of silence like bunch of magpies pecking the back of your head every time you go to meditate in the woods.

A nun, accompanied by her pet snow goose Besthenome, needs help getting back to her nunnery with a sled full of presents for all her sisters, kindly donated by the faithful in town; you’ve been paid by her superiors to keep an eye on her and make sure she doesn’t get too distracted by worldly temptations like gambling, caring for injured but still dangerous wolves, and kissing beautiful milkmaids.

5: SALEN, a coastal town in the centre of the region, which boasts something approaching a tourism industry – lots of local legends (some of them true) draw in adventurers in search of glory and slaughter, but most of them end up sitting quietly in one of the many cosy inns spread throughout the winding streets of the town. Given that the town is also popular with wizardly types due to particularly strong leylines, the economy of Salen has boomed over the last few decades, and travellers from distant lands show up in port on a weekly basis looking to trade.

Not every adventurer who comes to Salen is up to the task. You keep an informal eye out for those who might get in trouble – and when an underdressed sorcerer stumbles into the tavern saying that the rest of her adventuring party got lost hunting kenning-wolves in the woods around the town, you sigh and put on your hat before setting off to save them. Or take the valuables off their rapidly-cooling bodies; either works.

6: THE DEEPS, a network of abandoned dwarven tunnels that run throughout the region, which are largely uninhabited but often used by nefarious types to lie low, spring ambushes or hide treasure. The reason they were abandoned is that the dwarves who originally built them just didn’t have their hearts in it, so they’ve not lasted very well at all and flooding, collapse and the ghosts of betrayed miners are a frequent threat. Nowadays the only dwarves you’ll find in the deeps are isolationist weirdos burdened by a difficult relationship to their indifferent gods, and they’ll often flee rather than talk to you.

A refugee dwarf – off-white skin, hairless aside from a prosthetic beard, bag of stone slates with engineering secrets on them stolen from a mining workshop – says they’ve heard all about the Winter Festival from books and talking to outsiders and they’re desperate to experience it themselves. They don’t mention the Oblation Cadre who are hunting them in order to offer them up as a sacrifice to their gods, but it’ll definitely come up before long.