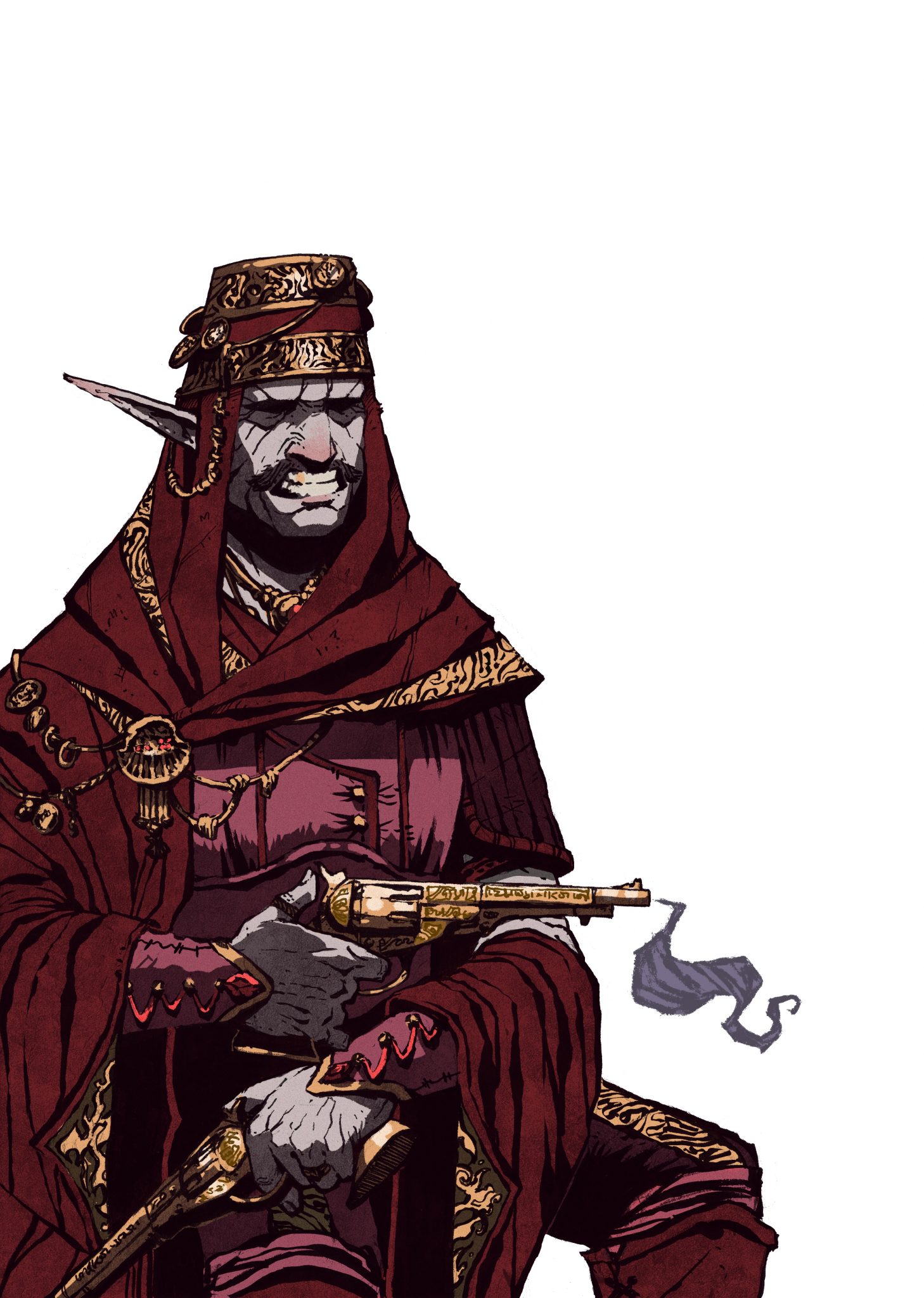 The Incarnadine is one of the classes from Heart, our upcoming RPG. Check out the Kickstarter here.

The Incarnadine is a priest of the goddess of debt. Incarne, as she is known, attracts few willing followers – instead, lives of cruelty and thoughtlessness accrue a karmic debt, and she will come calling for her due. Most of those she singles out die from sheer misfortune; Incarnadines ride the wave of debt and seek to master it, to turn the threads of want and desperation against their enemies, and to – maybe one day – pay off what they owe.

Firstly, they increase the value of all resources that they trade at landmarks. This isn’t terribly exciting, but it is useful, and it can keep a party going on long treks into the Heart.

Secondly, they explode upon death. Given the nightmarish web of profit and loss that most Incarnadines weave around themselves, they accrue quite a lot of enemies – more than they could ever hope to defend themselves against. To that end, every Incarnadine is blessed by their goddess with a metaphysical explosive wired around their heart – should it stop beating, it explodes. This forms a sort of mutually-assured destruction agreement between Incarnadines, which allows them to function as a series of warring feudal societies in the Red Market.

Incarnadines mainly function around desire and debt; they’re not fighters, nor are they pulling off the occult weirdness of the Deep Apiarist or the Junk Mage. CRAVE, for example, instills a mad desire for an object of the caster’s choosing in the target, and can be upgraded to make it permanent or viral. KARMIC LEDGER shows a target’s greatest debt against another person – and Incarne is broad in her definition of the word “debt,” so it might refer to someone whose son they killed, and so on. When you offer up their soul to Incarne, you can remove stress – but it also sets up a lot of stories, and gives you leverage over characters to get what you want.

Incarnadines are the most socially-focused of all the character classes in Heart – they wouldn’t be out of place in a Spire campaign, really. If you’re interested in dealing with the unique weirdos of the City Beneath in a talking, rather than a stabbing, sort of way, you’ll enjoy the Incarnadine.

(That said: they can fight, too. BACKSTAB allows them to tear it up so long as their opponents aren’t aware of their movements, and DEBTOR’S REDS gives them a set of vestments that inflict harm on their opponents just by looking at them.)

The ultimate expressions of the Incarnadine’s powers are threefold: ULTIMATE CREDIT, which lets you buy anything; ULTIMATE DEBIT, which lets you drop the full weight of Incarne’s displeasure on any target of your desire; and ULTIMATE REWARD. Unlike every other Zenith ability, ULTIMATE REWARD lets you retire safely from the game. It guarantees you a happy ending – you will die years from now, surrounded by your loved ones. But will you take it, when you could own anything you desire?

Those of you who read or played Spire will see the link between Incarnadines and Azurites – the  blue-robed priests of trade and cash who ran the Blue Market in the City Above. In many ways, the Incarnadines are a dark mirror to the Azurites; whereas the Azurite can fathom out exactly what a target wants and find it for them, the Incarnadine cuts out the middleman and rewires their target’s brain to tell them what they want. The sacred robes of Azur protect their wearer, and the sacred robes of Incarne harm their enemies.

Aside from just taking the Azurite and making them grim, the Incarnadine also ticks off our desire to make everything in Heart slightly reprehensible and slightly pathetic. They’re all being punished for things they definitely did wrong, whether they knew it at the time or not – and their goddess isn’t a kind or loving goddess, or even really on their side. She’s the manifestation of a cosmic bureaucracy that no-one really understands, and some days, we all feel like we’re part of that, don’t we?