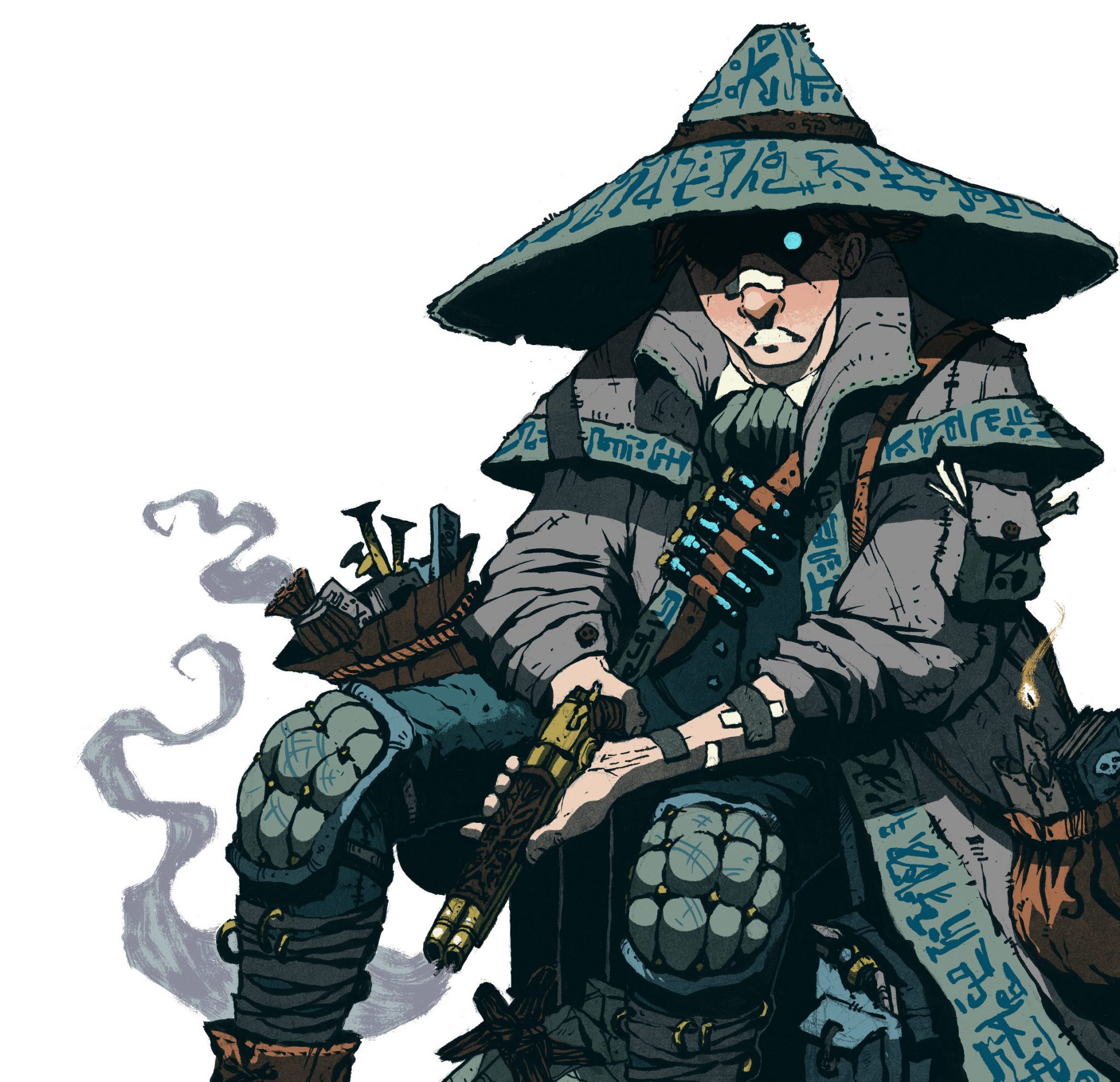 The Junk Mage is one of the classes from Heart, our upcoming RPG. Check out the Kickstarter here.

There is power in the Heart; ancient power, not quite asleep and not quite awake, burrowed in the red heaven beneath the earth. Gods sealed away for their crimes; extradimensional entities taking advantage of the tattered walls between the worlds; great sorcerers of ages past, now immortalised and far, far from the people they once were. Limitless potential, roiling away out of sight.

The Junk Mage works better when they’re slightly insane. If they have four or more Mind stress, they roll with mastery when using magic to achieve their aims. Seeing how fluid the fiction is in Heart, “using magic to achieve their aims” is a pretty broad category. We want to encourage players to show off how weird their characters are by drawing magic into their descriptions; a Junk Mage using the Mend skill, for example, could whisper broken items and bones back together, leaving spectral spiderweb over the pieces. Or set them alight, and have a new, repaired version emerge from the ashes and smoke. Mechanically, it’s the same as sitting down with some glue and string, but it’s up to you how magical you want your character to be.

So: by holding on to a little bit of Mind stress, but not suffering fallout, they do better at their jobs. This puts them into a knife-edge balance where they’ll want to freak themselves out a bit – expose themselves to the unnatural and strange – and then channel the stress into power.

They also get access to SACRIFICE, which allows them to destroy Occult resources in order to placate their – well, patrons isn’t the phrase, more “the beings that they’re stealing power from.” Consuming appropriate resource allows them to gain protection on their next magical action, allowing them to avoid taking stress and operate more reliably, at a cost.

Junk Mages are, fundamentally, warlocks. (Just over half of the classes in Heart are warlocks, if you squint.) We wanted to use this as an opportunity to talk about the powers beyond the veil in the world of Heart; the big stuff that’s happening off-screen, and not central to the Heart vs Real World conflict that’s at the core of the game.

So: the Junk Mage uses elemental magic. Fire, Water, and Earth – we couldn’t come up with anything interesting enough for Air, so it got cut. The entity for Fire is some kind of unreal beyond-space-and-time red dragon; the entity for Water is the Drowned Queen, a colonialist monarch who’s also an extradimensional eel; the entities for Earth are the Stone Chorus, who are the Titans from Greek mythology but with added angst.

Each comes with dominion over two things – their Blessing (which is their governing element) and their Curse (which is their fundamental flaw – the Drowned Queen, for example, is very dead and this gives her power over ghosts). There’s no limit to how many entities you can access, assuming you’ve got the major advances to spend, so you can steal power from as many places as you like.

Generally, the zenith abilities for the Junk Mage – the highest ones available to them – involve them bonding with the entities in some way. They also kill the user, because of course they do. The Drowned Queen offers up her hand in marriage to the caster as they summon her into the material realm and she seeks to make a pact to cement the transition. This gives the Junk Mage total control over a landmark, and all of its inhabitants, but the mental strain of being married to a mad ghost eel from beyond space and time is too much to bear for long.

They were always the best class in D&D 3.5; not the most powerful, but one of the most fun to play. They had spells you could cast as many times as you want rather than having to faff about with spellbooks and eight hours of rest; they were thematically interesting, rather than the grab-bag of everything that wizards and sorcerers ended up being. We didn’t have many warlock-like classes in Spire, so Heart presented us with a nice opportunity to talk about the weirdos who practice dangerous magic.

The first draft of the Junk Mage (back when they were called the Gutter Mage)  had much more traditional occultism – hands of glory, hearts with nails in, dream-quests for ominous doors, black candles, etc. It was good but it didn’t say anything about the world, and the best classes help sketch out the setting around the player. So we overhauled them, put the old-school magic to one side, and made them desperate addicts instead.

“Junk Magic” is an old term of ours – we came up with it, oh, six years ago? It’s in an unpublished novel about drunk wizards that Grant wrote, and it crops up in our game Royal Blood too. It’s magical hacking, lying to demons, throwing together spells from fragments found here and there, casting by the seat of your pants. It felt like a natural fit for the lawless environs of the City Beneath. We’ve also leaned into the other meanings of Junk, too; each Junk Mage is an addict, hooked on the rush of sensation they get when they plumb their tiny, fragile human mind into something huge and powerful.  They’re garbage, too – no magical school worth their salt would accept them through their doors.

In a world where your wizard is full of alien bees, your witch is afflicted with a magical blood disease she caught from a well that’s also a mouth and your fighter is wearing armour they stole off a cursed train, the Junk Mage gives players and GMs a way to drop weird and exotic stuff into the game and have it still make an impact.