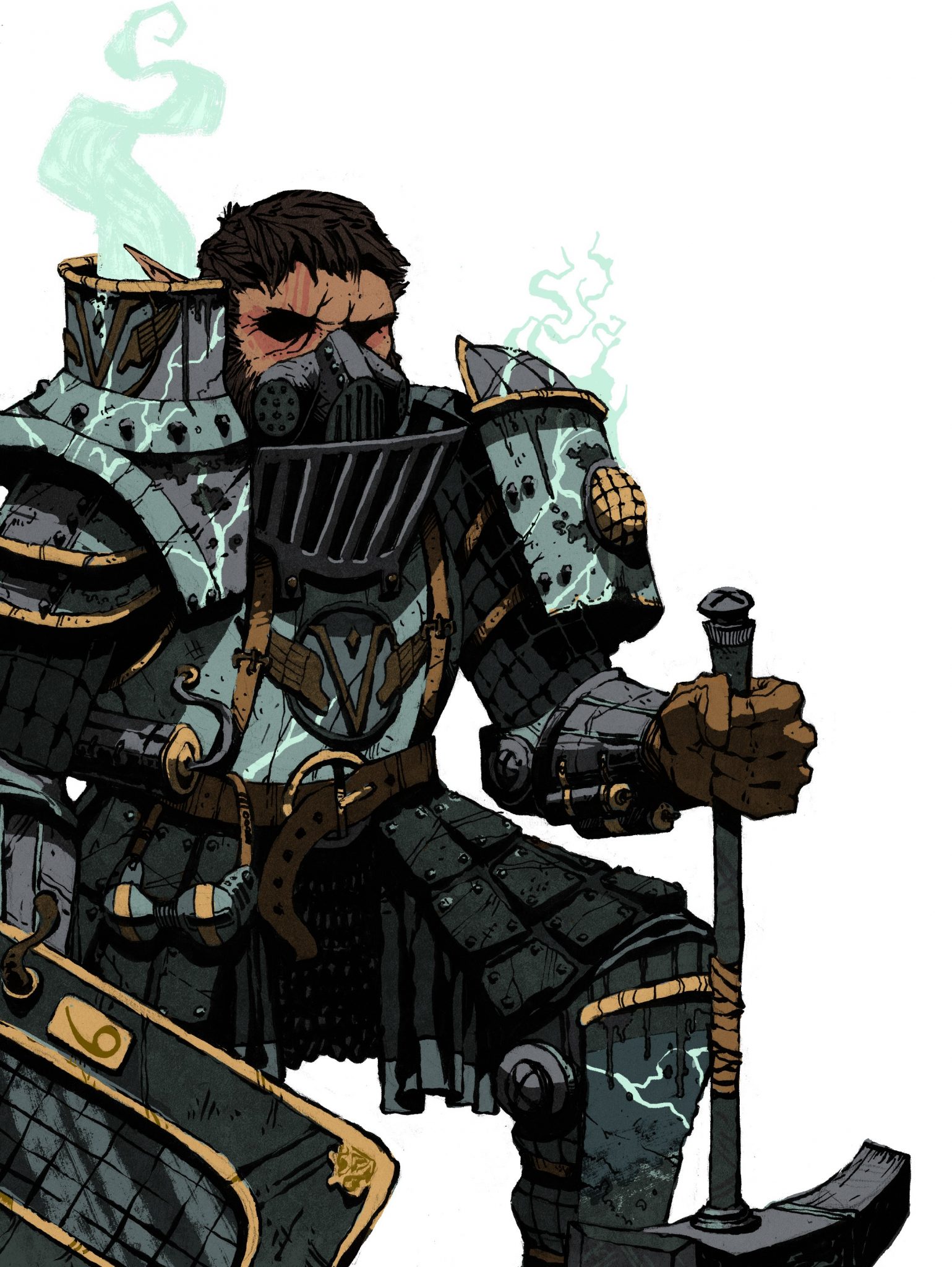 The Vermissian Knight is one of the classes from Heart, our upcoming RPG. Check out the Kickstarter here.

The Vermissian is cursed. Intended as a revolutionary mass transit system within the city – the first in the world of its kind – the creators attempted to pierce the Heart Itself in order to power its engines, and unleashed a nightmare unreality throughout the dark corners of Spire. Within the bounds of the Vermissian, time and space come unstuck – but it provides limitless potential for those brave enough to explore it.

The Vermissian Knights are brave enough to explore it. They are protectors, avengers and guides for those who would step into the thrice-damned tunnels; they wear uncanny powered armour made from repurposed train parts, and channel the network’s loose grasp on reality into strange technologies.

The Vermissian Knight used to have the core ability SHORTCUT, which made delving quicker. But it felt unbalanced, and also cut out quite a lot of the fun part of the game, so after playtesting we decided to swap it out. Having spent a while talking about what was the core image of the Knight, we kept coming back to their armour – hulking, semi-powered, repurposed and mysterious. We made it their core power.

Now, with VERMISSIAN PLATE, the Knight can consume resources with the Occult or Technology domain – presumably by repairing it with them or just shoving them into the furnace – to power it up once per session. You can find full details of this in the Quickstart game, but suffice to say it lets you, for example, burn the pages of a magic tome inside your suit and wreath yourself in shadowed energy to gain the Sneak skill, or ignite the parasite-ridden bark of the Blighted to release the resonance within and smash apart your enemies.

Want to kill big things? The Vermissian Knight has an ability specifically devoted to that! DRAGON KILLER improves your damage and defence against anything that’s significantly larger than you, and in the Heart, lots of things are significantly larger than you. Upgrade it enough and you can summon a particular monster that’s hunting you – it’s still hunting you, but it might well kill some of your other problems along the way.

AETHERIC FIELD protects you from the weird energies of the City Beneath, and allows you to reroute ambient power into augmenting your attacks or overwhelm adversaries with waves of force. ECHOING RAILS allows you to find back doors to the Vermissian – even if they weren’t there when you previously checked – and access moving haunts to heal your wounds and gain respite. GUARDIAN puts you into a classic knightly role; you become better at defending something, no matter what that is, and you inspire those around you to greatness.

We wrote the Vermissian Knight first, and the first Zenith power we wrote for them is THE LAST TRAIN, which informed a great deal of the rest of the abilities in the game. Using THE LAST TRAIN summons The Last Train – the only remaining functional locomotive on the Vermissian network, which is unable to ever stop and is only loosely steerable – and it smashes apart everything in the area. Here it is:

There are others, too; becoming electricity and blinking between Technology landmarks, or punching with the power of a flat-out engine, but THE LAST TRAIN is the one that really sums up the Knight for us.

Take a Paladin. (Paladins get a bad rap, I reckon.) Remove the whole “god” bit and replace it with a furious desire to protect people; to impose structure and understanding on a world that defies it. Combine that Paladin with Iron Man, because powered armour is cool. Channel the Vermissian Sage class from Spire into it, so none of the technology works properly and no-one understands how it functions, and tinge everything with the occult.

That’s the Vermissian Knight. The big turning point on was seeing Felix’s art – we knew that the Knight was cool, but seeing the dude in armour looking battered and faintly sci-fi really sealed the deal. Have I mentioned, also, how I’ve been playing Warhammer 40,000 for the last twenty years, and always been quietly fascinated with the blend of high-tech and low-tech that that game has? Maybe you can see my obsession in the Knight.

The Knight is easy to play; they’re a knight, and knights hit things and protect people. (In roleplaying games, at least. The less said about knights in real life the better.) They’re the Fighter class, for want of a better word, and they do the protecting and hitting that Fighters do, but they also have a special domain that’s all their own – the Vermissian. More than any other class, the Vermissian Knight allows the player to claim spotlight time and show off their abilities.