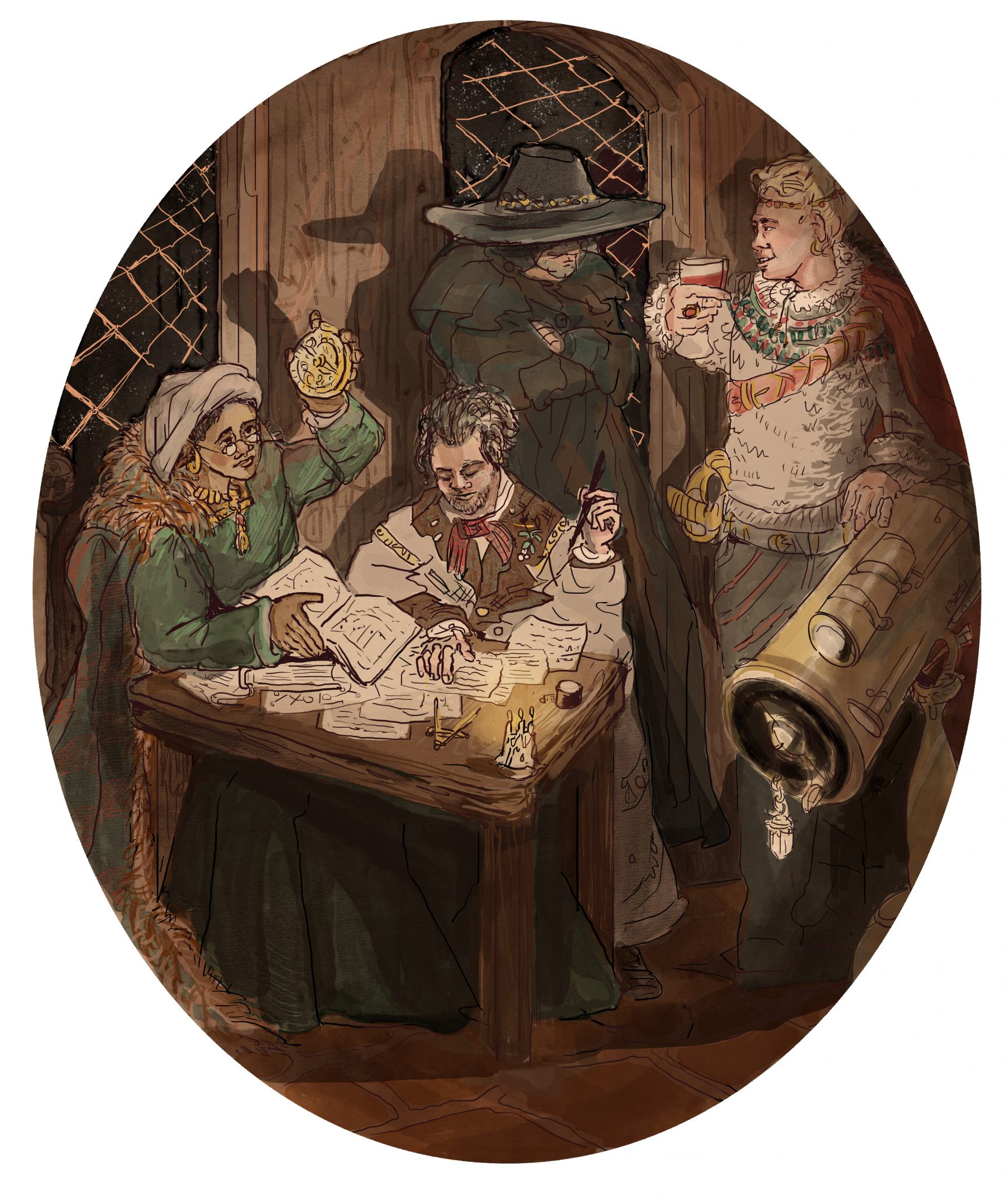 1: Prince Otto Castellan, fourth son of a family who have long fought against the darkness and played central roles in over a dozen prophecies in the last couple of centuries. Wessex Castellan slew the Night Hag that plagued the benighted city of Yarim with nightmares; the young Spuria Castellan returned the Astral Chalice to its rightful resting place in Ebon Vault; and the indominatable matriarch Quaria Castellan personally destroyed a vampiric invasion that threatened her estate with nothing but a handful of injured knights and a single cannon.

Otto has been shipped off to the north in order to keep an eye out for any evil and slay it should the chance arise – although really the Castellans just wanted him out of the way somewhere his romantic dalliances and mild alcoholism wouldn’t cause too much trouble in society. He has noticed the coming of this particularly dire winter and is really not looking forward to leaving the fireside and killing whatever’s causing it.

2: Three Wise Men who have traveled here from the far south upon the backs of strange many-legged creatures in search of a messiah. Last two kingdoms they had a shot at came up empty and they don’t want to go back home empty-handed, so they’re asking around to see if anyone’s got any spare spiritual leaders being born just in case. Balkarian, the eldest and by far the smartest of the three, looks like he’s desperate to go home and would probably be open to taking part in some sort of ruse to convince the other two to do so.

3: Kane, just Kane, wears a big hat and coat, likes to hang out in dark corners of bars nursing a single pint and mutters grimly if anyone attempts to drum up a conversation. Kane is a hunter of Doom Elves and he’s heard tell that there are a few round these parts, so he brought his crossbow and silvered blade and got to huntin’. Despite being a terrible misanthrope and enthusiastically willing to throw other people in the way of danger, Kane is an expert on doom, so he could probably teach you a thing or two.

4: Sintil, a scholarly-looking druid (they pair a tweed jacket with the typical thatched-roof druid haircut) who has long been touring magical colleges espousing restraint on the use of sorcery due to the increasing likelihood of widescale environmental backlash. After being forced out of their lodgings down south by proactive venture-capitalist wizards, they’ve steered their crusade north and are handing out literature on the various different magical apocalypses that await the mortal inhabitants of the material plane should they carry on recklessly firing arcana into the atmosphere.

5: Bryn Broadham, adventurer-at-large, more moustache than you’d know what to do with, wearing a now-tattered wedding suit under his cold weather gear and armour. His impossibly beautiful husband-to-be Horatio was abducted at the altar by a jealous winter fey, and the heartbroken Bryn is looking to find ice dragons that he can train to pull his special Ethersled that – he reckons – will allow him access to whatever backwater dimension his beloved is frozen solid in. Best of luck to him.

6: Quinn Hyssop, half-elf astrologer, interested in taking readings of the stars at the foot of Svartfjell. Quinn believes (correctly) that the stars here are “going backwards,” in as much as stars that were thought lost centuries ago are now visible in the night sky. He’ll pay handsomely for anyone who’s willing to accompany him (and help carry his bulky, heavy equipment) to the mountain and keep watch while he stares up into the uncanny heavens

Previous: D12 Things the Doomsayers are Yelling in the Town Square
Next: D6 Things You See On The Outskirts Of The Village

2 thoughts on “Adventure Calendar Day 13 – D6 Travellers from Abroad Who Probably Want to Hire You, An Adventurer”