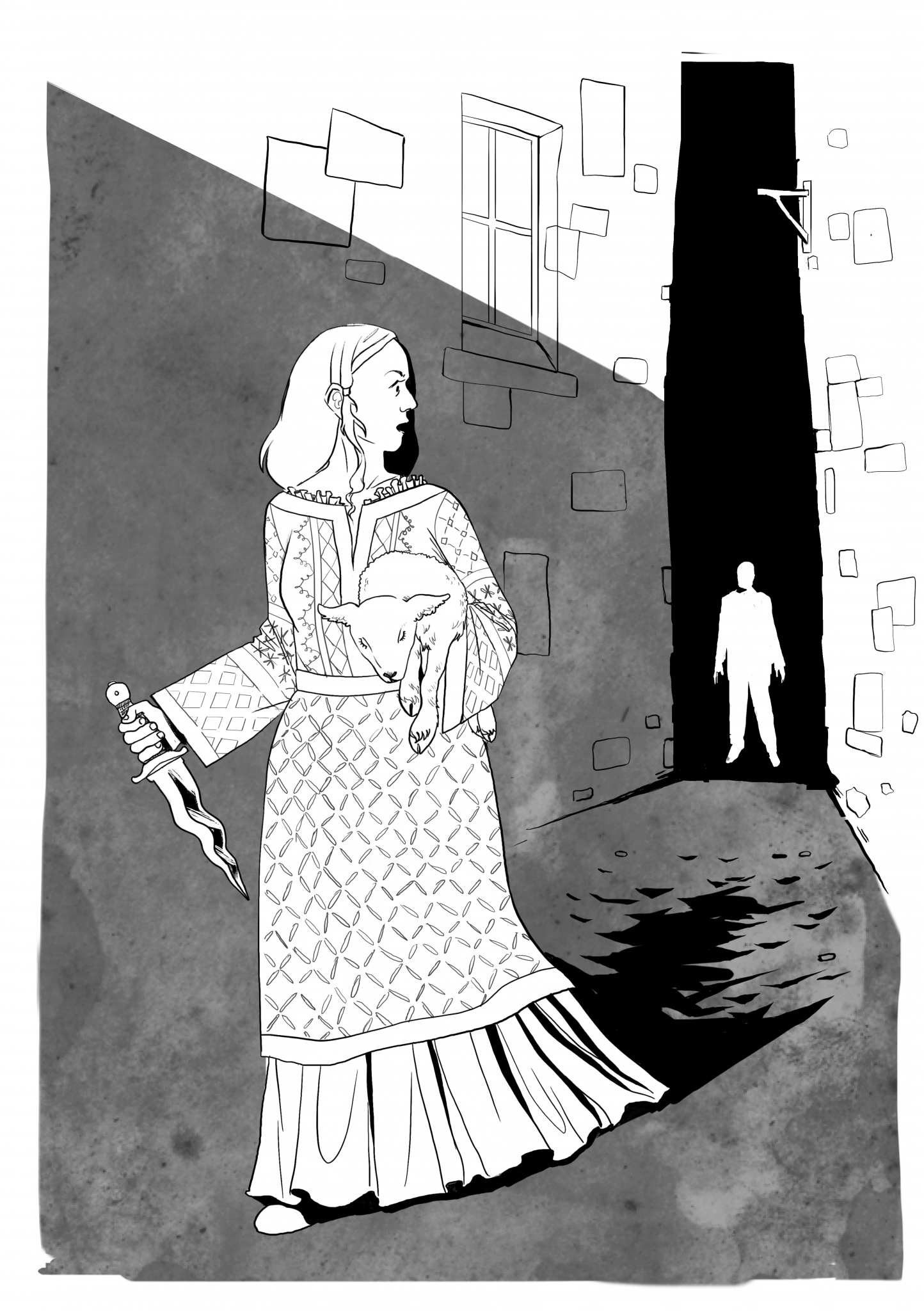 As the weather grows increasingly bleak – even as far as winters up in the far north go – and monster attacks increase, and the Doomsayers preach apocalyptica in the streets, the people start to take action.

1: THE BLACKSMITH, who’s never made a sword in his life and much preferred doing horseshoes and the occasional copper sculpture, has started churning out as many weapons as he can to fight off the coming dark. He says that there’s a vein of particularly resonant ore in the foothills near Dovescopp, but his son went missing a few days ago after he left to look for it. If you can make sure he’s okay, there’s a magic weapon in it for you. [They’re not brilliant magic weapons; they function as +1 flaming weapons, but each of them has D20 charges when made. Expend a charge every time you hit with an attack.]

2. OLD MR FELL, who was never especially in touch with reality since his wife left him, has given away all his worldly possessions (there’s a perfectly good armoire in there that no-one seems to be claiming, if you’re interested) and walks out into the snow to die “amongst the voices.” If you keep an eye on him he’s sure to lead you to something interesting (and you might be able to talk him out of dying too).

3. YOUR COUSIN MELAS was always rather quiet and bookish so it came as a surprise when you heard she was sneaking out at night to sacrifice stolen farm animals to dark gods. Her dad caught her and stopped her, but now the attacks on the town from strange beasts have increased, and she says that it’s because she can’t do her sacrifices. Are you going to help her, or try to keep the monsters at bay some other way?

4. THE WIZARD, who you always thought was a bit aloof and never quite fit in with everyone else around these parts, decided to get the hell out of town and magicked her entire tower (with her in it) to an adjacent alternate reality. Unfortunately, due to the rules of As Above So Below, a wizard from the reality they fled to (and their tower) has taken their place, and they’re understandably furious about the whole thing. They have some cool books from an alternate reality – and green hair, which is fancy! – but no way to get back home without the help of some brave adventurers willing to steal stuff from wizards in neighbouring towns. They offer to bring you along for the ride, if you’re willing to lend a hand.

5. THE OTHER WIZARD, who you always suspected was kind of a shyster and didn’t actually know any magic, is offering teleportation spells away from here. A few of the richer families have taken him up on it; upon investigation, you’ll discover that he’s just fed everyone poison, took their stuff, and then fed the bodies to his three identical pig familiars to get rid of them. If he was sacrificing them to some dark god that might be exciting and perhaps worthy of respect, but it looks like he was just robbing them.

6. THE BARON, who has boarded himself up in his chateau and surrounded himself with guards whilst hoarding supplies. People are going hungry and the town is defenceless against a spate of wild animal and monster attacks – maybe someone could persuade him to share with everyone else. There’s bound to be a way to get in that he’s missed. Or maybe you could just threaten to burn it down.

7. SISTER BELLIGERENCE, who loves celebrations and getting everyone in the village together during the festive season, and is attempting to keep the Winter Festival going despite the terrible weather and general lack of enthusiasm from the townsfolk. She has a few other hangers-on who are stringing up bunting, handing out little cakes (they’re not very good) and trying to get volunteers who are willing to help decorate the tree. It’s pretty sad, but if you help out and put the effort in, a party might give the town a much-needed boost.

8. VESTERAS, a brilliant but difficult scholar who was sent up here by their university to study ptarmigan migration patterns, has packed in the ornithology and is instead trying to work out what’s in store for the north by recording, cross-referencing and analysing everything that the Doomsayers are yelling in the town square. It’s not an exact science, but they have some theories – the primary one being that the drugged-up prophets are plugging into potential futures, and that the clearer and more common a particular topic is, the more likely it is to happen. [Vesteras has access to several of the tables from this collection, each missing a couple of entries, and written in an academic and speculative tone.]

Previous: D6 Things You See On The Outskirts Of The Village
Next: D8 Concerned Villagers