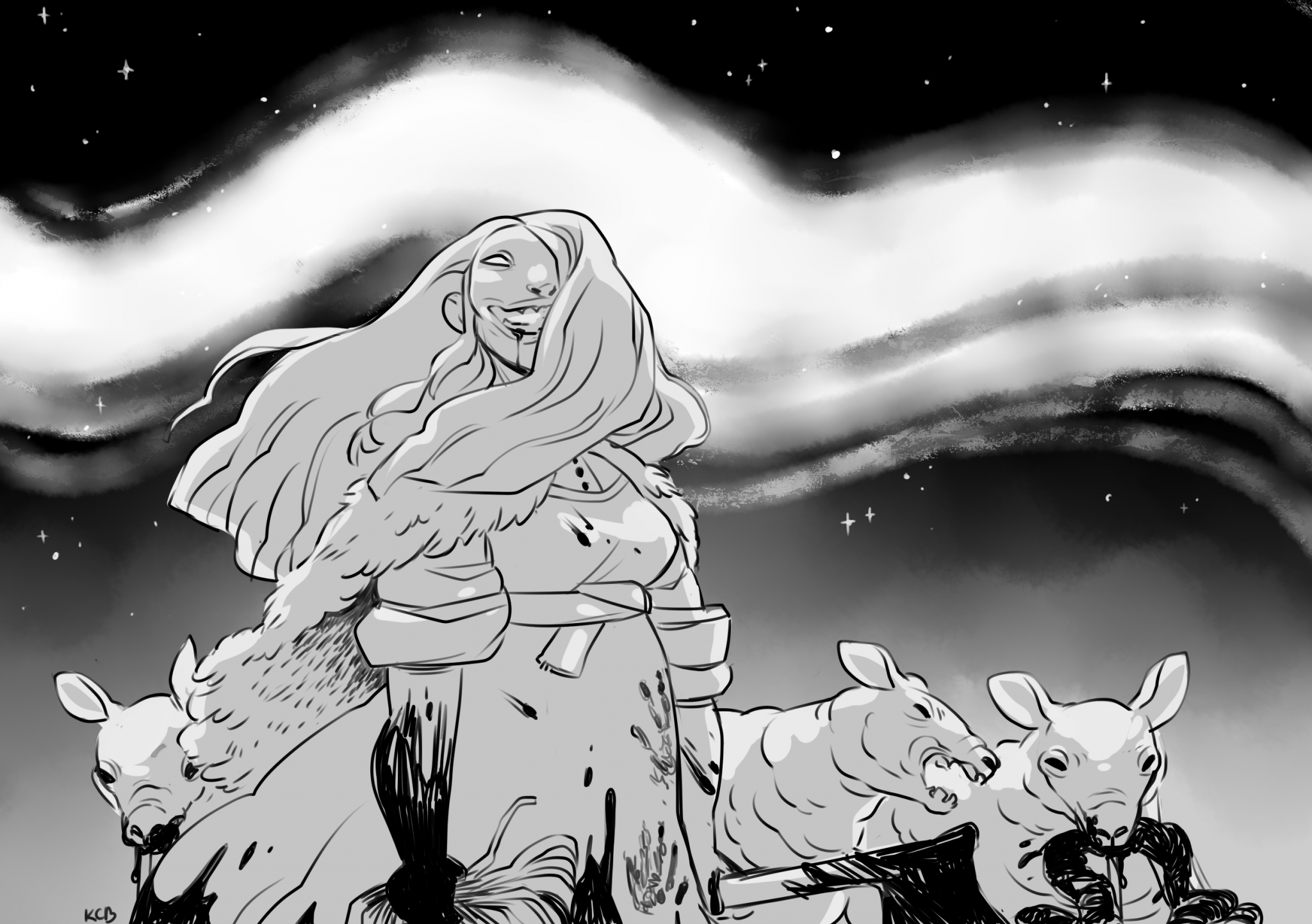 As the world freezes solid and reality cracks like ice on a pond, the sky above the battered earth fractures into new and terrifying patterns. Auroras dance and flicker across the heavens – the dreams of dying gods spilling out in multichromatic sprays that burrow into the weak minds of mortals and skew them into patterns unthought of.

1: RED. The bringer of fury – a crimson stain on the snow leaving spilt blood as black as the unadorned vastness of the night sky. Brother turns on brother; father on son; beasts of the field gnash and tear at one another, hungry for meat. [Average Will save for each hour of exposure; on a fail you double your rolled melee damage until the aurora passes, but for each hour you don’t spill someone or something’s blood, take D8 psychic damage.]

2: BLUE. The bringer of despair – a sadness as vast and heavy as winter’s snowfall, creeping under curtains, settling on the roof with an audible creak. The afflicted lose all sense of purpose and lay down in the snow to die, or collapse on the floor of their house until the sun rises once more (or the colour of the aurora changes). [Average Will save when you first see the blue light; on a fail, drop to the floor where you’re standing until the aurora passes or someone drags you out of the light.]

3: WHITE. The bringer of greed – a hunger that ransacks heavens and murders mothers. Those struck by this light become frantic and desperate with greed, and have no qualms about carrying out atrocities in the name of securing more wealth. [Easy Will save at the start of the night, increasing to an Average by midnight and Hard by the early morning. On a fail, you are possessed with a frantic lust for wealth, and must secure D100GP worth of supplies before the morning or the aurora changes. When the effect wears off, lose 1 HP for each GP unclaimed.]

4: PRISMATIC. The bringer of waking dreams – a puppeteer plucking at the strings of the world by accident or design. Towns have been overtaken with dozens of sleepwalkers, their eyes unfocused and mouths slack, working in tandem to achieve nonsensical tasks – slaughtering every pig in the village and draining the blood into a pool in the market square, building mazes out of dirt mounds and discarded planks of wood, writing epic poetry in esoteric languages on the walls of buildings, and so on. [Easy Will save or spend the night engaged in a strange task set by an unseen hand. Sharp pain allows the target to make another save attempt.]

5: GREEN. The bringer of fire – strange flames that spark into life when bonfires or torches are struck by the light from the heavens. Quickly spreading out of control and burning an eerily beautiful emerald green, they consume buildings and forests in raging conflagrations but leave snow untouched. [20% chance an open flame will spread out of control when exposed to the aurora. Snow won’t extinguish it – you need water, or sand, or some other solution.]

6: YELLOW. The bringer of tumult – a ringing, reverberating metallic noise that echoes throughout the valleys of the world. The light from the heavens is loud – people caught in the open when it comes into effect are deafened, and even those safe inside can’t sleep or focus on much. [Recovery rates halved due to the maddening ring. Hard Toughness save if you’re caught in the light; on a fail, you’re deafened for a day or two.]

7: BRONZE. The bringer of time – chronological aberrations spill out from the dreams of dying gods and mar the landscape beneath them. Trees sprout overnight, houses crumble and rot, skin wrinkles and bones grow fragile, minds strain and break. Sometimes the land reverts to normal once the aurora has passed, sometimes not. [Everything within the light ages a year for every ten minutes of exposure; Hard Will save to reduce it to a year per hour instead.]

8: TURQUOISE. The bringer of water – strange, shimmering waves descending from the heavens to the ground. The light acts as though it was clear, traversable liquid, meaning that unattended items have a chance of floating off and anyone or anything caught in the light will, eventually, drown.