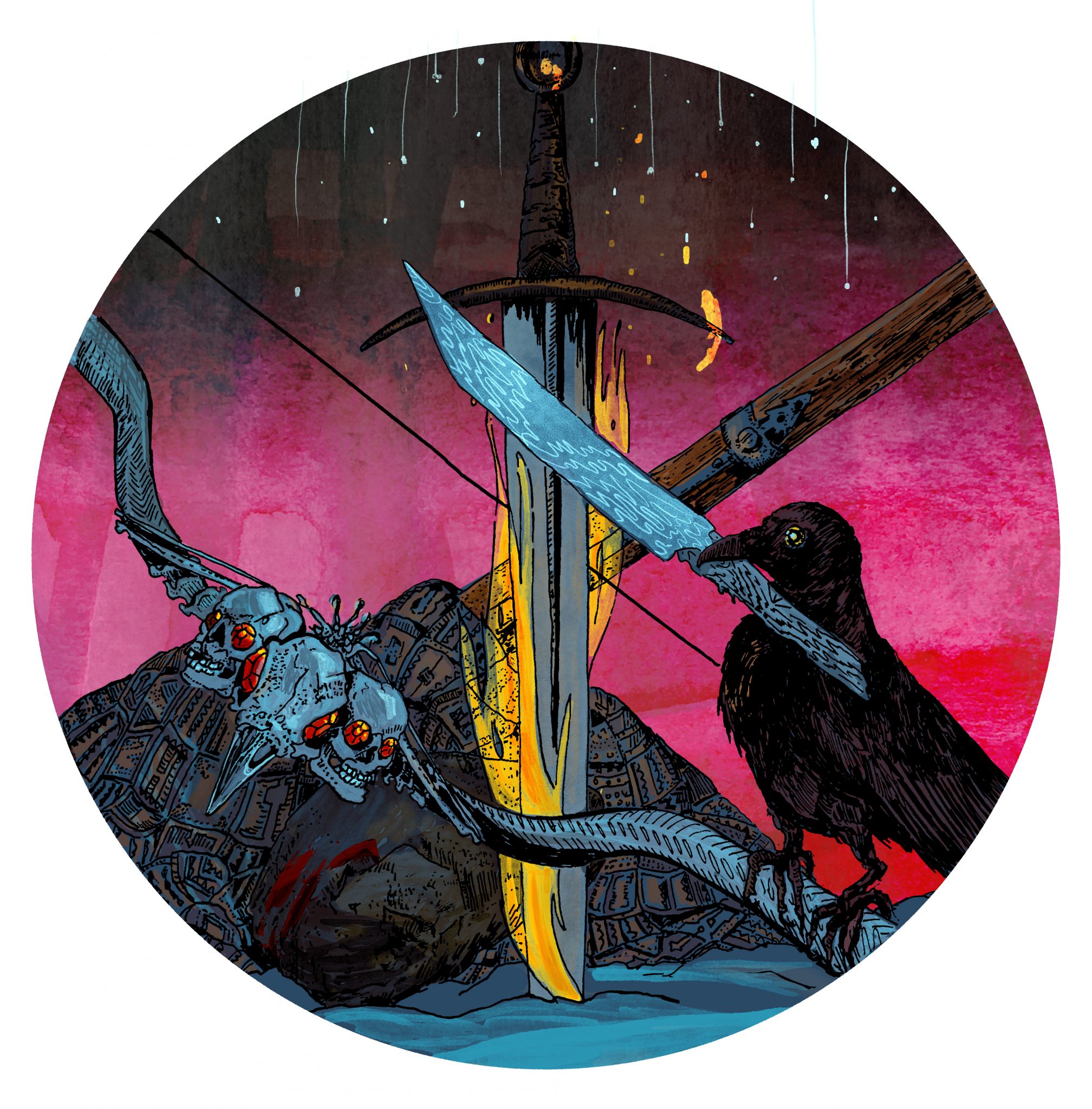 1. STONEKILLER. A great double-handed dwarven hammer covered in fine hexagonal decoration and words of unmaking. Stonekiller absolutely loathes buildings – the fact that it was probably made in a building fills it with an existential disgust that can only be drowned out by destroying a few buildings, or at the very least knocking over a watchtower. Like most dwarven weapons, Stonekiller is fuelled by the transferred wrath and malaise of the crafter (who runs a nice craft workshop for dwarven kids four days a week down by the coast thousands of miles from here) and as such it is furious whenever awoken, so most users keep the business end under a blanket to avoid having to calm it down. Stonekiller is convinced that the First and Final God built Svartfjell and, as such, wants to knock it down. It won’t be able to – it’s a mountain! – but it might be worth bringing it along for the ride. [+4 greathammer. Ignore hardness and/or DR of buildings and inflict double damage against them.]

2. ASHES. Ashes hasn’t met a flaming sword it didn’t kill and eat. Ashes is a flaming sword itself – a classic magic item for a reason – and it is singularly devoted to being the only flaming sword in existence. At a pinch, it’ll make do with eating regular fires, but what it really wants is to get up amongst the echelons of the gods and see what kind of flaming swords they have on offer. [+3 flaming sword. If Ashes is held against another weapon with a fire enchantment, it will consume that weapon’s enchantment and boost its own bonus by half of that conferred by the other weapon until the next new moon.]

3. THE MURDER STONE. Everyone’s heard the story of the first murder – two brothers, one of whom was kind of a dick, you get the gist. This stone was the evil brother’s weapon of choice. It is forever stained with dried blood, it feels heavier than it ought to in the hand, and all it wants to do all day is kill. [+2 D4 hand weapon. Every time you roll an attack against someone you’re trying to kill with this weapon and don’t land a critical hit, its crit range improves by 1 and its crit damage increases by one step (triple, quadruple, five times, etc). Once you crit, the bonuses reset and the red mist clears from your vision.]

4. DEATH’S MESSENGER. This bow is ridiculous. Stolen from Death Herself (which is why she uses the scythe now), it was designed by a forge god who had a dramatic and entirely unrequited crush on her and as such is hugely over-embellished and awkward to use. The bearer is perpetually surrounded by ravens; clouds dramatically swirl over their head when it’s drawn; nocking and drawing back an arrow causes all sound to cease around the shooter; it’s covered in ruby-eyed skulls and platinum bones; etc. [Critical hits with this weapon kill the target. Critical misses with this weapon kill the user.]

5. DOOM COMPASS. This simple iron compass, lightly patterned with rust, uses the sharpened fingerbone of a doom elf instead of a magnet – and instead of north, it points towards the nearest available source of doom. [In the Adventure Calendar campaign, it will tend to point towards the location of the First and Final God.]

6. WINTER’S EDGE. Winter’s Edge is a beautiful knife created by elven artisans from some fallen and forgotten kingdom that once ruled these lands. (It’s certainly older than anything you’ve seen before.) In addition to being a well-made magical weapon, it is legally married to the First and Final God and is very excited to reunite with its spouse after what feels like, and has indeed been, millennia. Winter’s Edge is actively recruiting people to bring it closer to the First and Final God so they might once again be together. [3+ dagger.]

7. SOULTAKER. Soultaker is an ostentatiously evil-looking punch dagger that feels heavier than it should and is always unsettlingly warm to the touch. Those slain by Soultaker enter the service of their killer as undead thralls – for a while, at least, until they go off – and after that their souls are taken. The weapon has its own bespoke universe where it lives surrounded by the enslaved spirits of the thousands of people killed by the weapon, waited on hand and foot. (Or: waited on pommel and blade, at least.) [+4 Punch dagger. Creatures slain by this weapon become a dim-witted zombie under the control of the wielder for D6+(their level) hours, at which point they decompose at an accelerated rate and must be abandoned.]

8. GLORY’S CHAMPION. This mighty greatsword shines like the rising dawn and sparkles with all the splendour of heaven; the parchments attached speak of sacred missions to slay wicked sorcerers and promise that the angels themselves have your back. With this at your side, nothing can stop you. [+0 Greatsword that’s desperate to take part in averting the apocalypse so it’s lying about how good it is. If it comes up, it functions as a +4 greatsword that also adds +4 to the AC of anything you hit with it, but don’t tell the player about the second part]

Previous: D8 Colours of Northern Lights that Spark Madness
Next: D6 Cults Who are Attempting to Curry Favour with the First and Final God