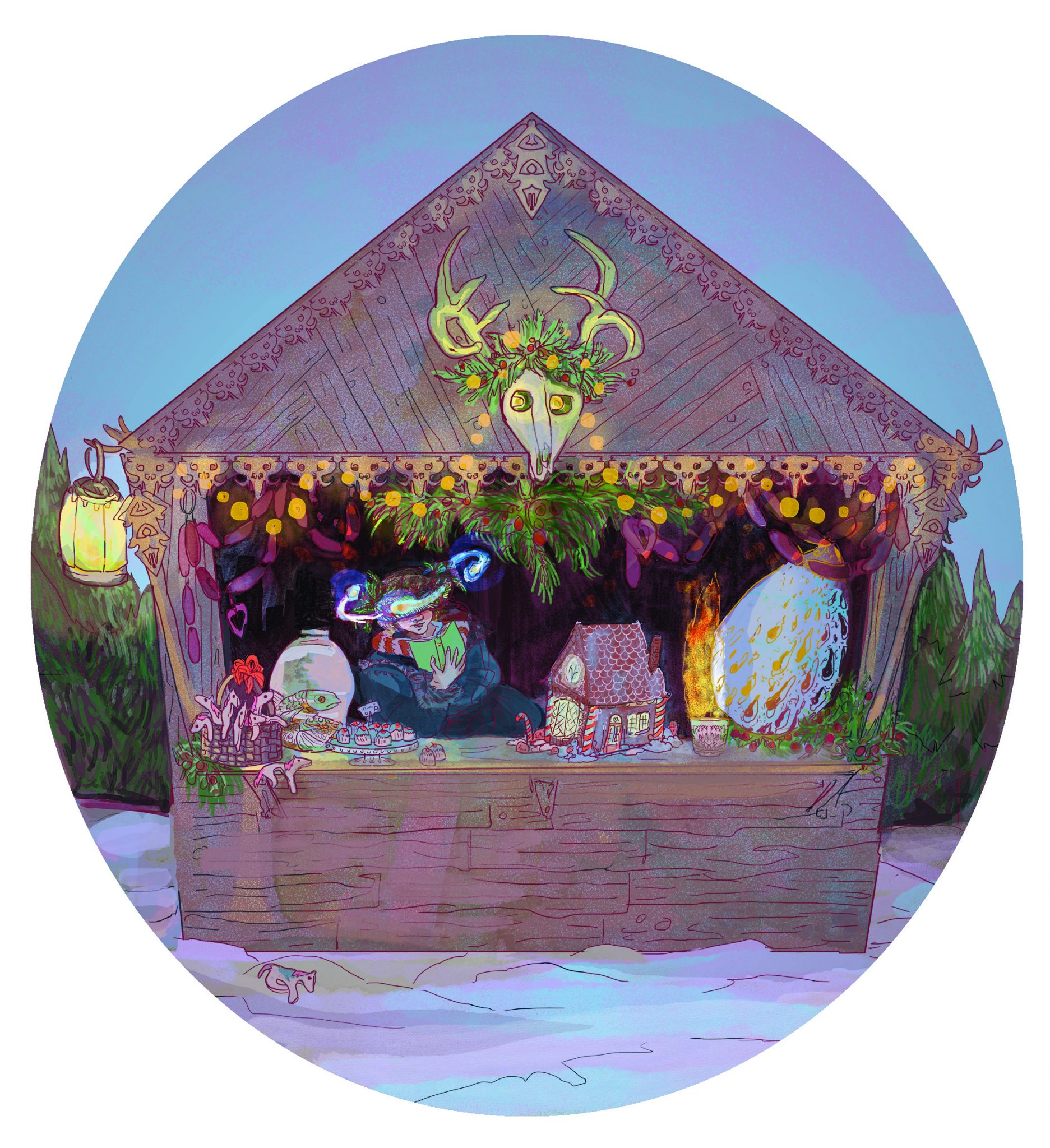 1: FIERY CINNAMON WHISKEY. Brewed with real fire elemental ambergris! Almost impossible to drink, but it lets you breathe fire (D3 damage to anyone standing nearby) as a quick action for a minute or so after you get it down your neck. Pass an easy Toughness test when you drink it or immediately puke flaming booze down your shirt (D3 damage to yourself and anyone you’re sick on).

2: MARCHING GIN. Military drink popular with the Winter Festival employees; it keeps you on your feet despite events conspiring to push you off them. It’s a Bostivolian drink and they put pickled herring in the bottle for reasons they’re unwilling to explain – you can get it with or without at the festival, and most people choose without. (The Bostivolians get it with herring as a mark of pride and love to pretend that it isn’t disgusting.) A measure of Marching Gin downgrades all exhaustion and cold weather penalties by 1 step, or if the game you’re using doesn’t have tiered steps, it provides advantage on rolls made to endure tiredness and bad weather.

3: SINGING CIDER. Skilled bards serenade this drink and the song lives in the liquid; drink some and you can sing the echoes of it for a while. (Unskilled bards sing into the cheaper versions by the barrel-load, often using bawdy songs and illegal lyrics to draw in customers.) Rich people use it to sing musicals or operas at excruciatingly long dinner parties (or worse, tour the neighbourhood and knock on doors to inflict the performance on other people); the kind you can afford gives you about five minutes of synchronised atonal yelling about salacious deeds performed under the mistletoe.

4: LEOMUND’S EDIBLE HOUSE. Is that THE Leomund, copyright Wizards of the Coast? Hard to tell – if it is, he’s lost weight. Probably not him, if any lawyers ask. Anyway – someone called Leomund is here, and he’s selling gingerbread house making kits. You stick it together with icing, and when it’s all set, you can open the front door and magically walk inside even though it’s only about eight inches tall. You could probably modify it into some wild and unpredictable shapes, but make sure you don’t end up in some sort of interdimensional biscuit collapse.

5: LEOMUND’S EDIBLE HORSE. Determined to recoup his costs despite initially filling out the wrong section on the order form, Leomund is offering magically-animated gingerbread horses. They absolutely hate getting eaten and, being two-dimensional representations of horses rather than actually horse-shaped, they can’t really move. There’s an awful basket of them writhing at the front of the stall.

6: IOUN CAKE. Made by trainee wizards as a means of raising funds for supporting out-of-work or alchemically injured sorcerers, roughly one in twenty of these small almond-and-honey cakes contains a functional ioun stone – the kind that orbits around your head, glows slightly, that kind of thing. It’s traditional to buy one when you come along to the market, and if you get one with an ioun stone in it, that’s good luck. (The ioun stones are non-functional, in as much as they don’t do anything aside from hover and look fancy.) Unscrupulous wizards (or people passing themselves off as wizards) will reduce the odds of getting an ioun stone to increase profits, and it’s not unheard of for a stall to contain zero lucky cakes. Elder wizards from local towers and hermitages make a show of walking past ioun cake stalls with big horseshoe aethermagnets to detect magic, and turn you into a frog if none of your cakes are appropriately levitational.

7: GLITTERSNUFF. Not food or drink, but: you put it up your nose, and that’s close enough. Glittersnuff is a shiny power that produces a moderate high in the user leading to increased jollity and overall festive cheer, but rampant sneezing after use is the main draw – users eject great plumes of glittering dust and luminescent mucus from their noses and mouths, and sometimes it’s in cool shapes like dragons or boats or firework displays (moderate Charisma check when you use it to have it function as glitterdust spell). Given that the festive market takes place at the height of flu season, most every cleric in town has argued that a drug that makes you sneeze on one another is a terrible idea and it should no longer be sold.

8: DRAGON EGGNOG. It’s not made from real dragon eggs, of course – that would be ridiculous. Instead, much cheaper wyvern’s eggs are used to make this absolutely massive drink, usually purchased in a sort of bucket to share between friends. It’s traditional to let a guest of honour take their eggnog out of the wyvern’s eggshell, but as bits of it tend to come off in your mouth as you drink, it’s also traditional to find a polite reason to refuse it.

9: YEAR BREW. Dark beer so viscous you’d probably need a fork to break it up before you drink it. Stuck in a barrel at the festival every year and left to mature until the next year’s festival, whereupon it is drunk and part of it is mixed back into the next year’s batch. Year Brew is widely considered to be awful, but if you drink a pint of it and manage to keep your head (hard Toughness check or do something embarrassing) then you’ll earn the respect of the enormous, wide-as-they-are-tall men that sell it in big wooden flagons every year.

10: TWO-HEART SAUSAGE. This chewy sausage is made from the minced cardiovascular muscles (heart) of a male deer (hart), and despite being created in service of a pun, it’s pretty good. It’s served cured and sliced thin, rolled around pickled vegetables – a popular variant is to wrap it around an artichoke heart, making it a three-heart sausage. Experiments in search of a four-heart sausage continue every year, but so far nothing has stuck.

Next: D6 Places To Go, People To See