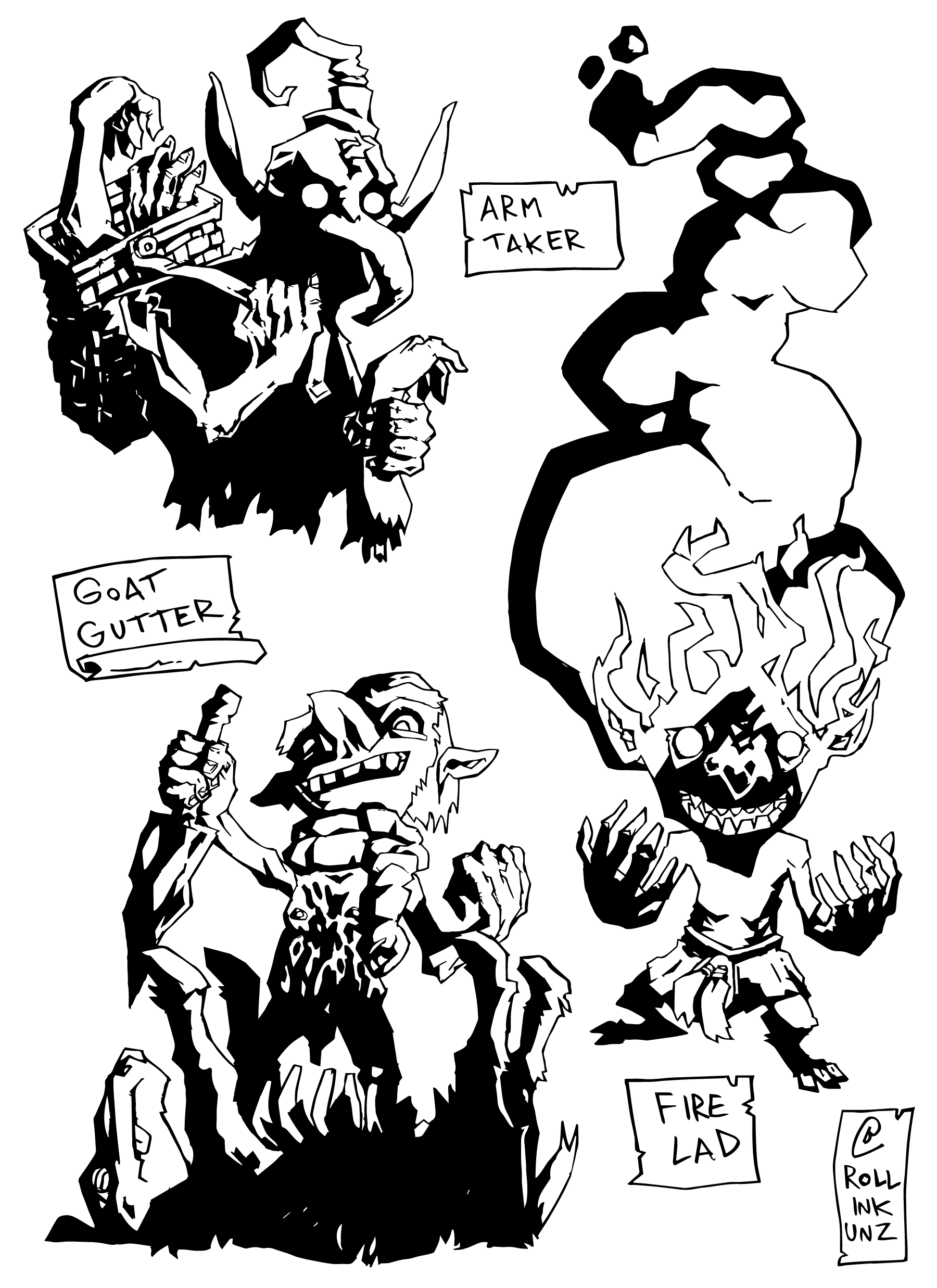 1: GOAT GUTTER. Guts goats. Wears the steaming entrails like an awful scarf. Takes off his trousers a lot, scratches his genitals with bloody hands, really just not a nice guy.

3: ARM-TAKER. Collecting arms to “build a woman” in a cave on the outskirts of Salen. Not entirely clear why he’s just using arms or what this woman looks like – or how far along he is with her. Last couple of nights she’s started making noise at night (you can hear her even over the driving wind) so clearly he’s worked out some sort of mouth-analogue.

4: KNEE-BREAKER. Knee-Breaker hates seeing people walk around on their big long legs so he smashes their knees apart with hammers to teach them a lesson. He never uses the same hammer twice; sometimes he leaves them as traps to attract people, which isn’t a great idea, because people generally don’t want to touch blood-soaked hammers. This upsets Knee-Breaker no end.

5: GRAIN SPOILER. Pisses or retches horrible black-brown translucent fluid into stores of grain and other food, which ruins it. Can be seen in the distance gulping muddy water out of a big wooden bucket, waggling his bushy eyebrows at you, and pointing excitedly at your pantry.

6: SAUSAGE-MAKER. This Yule Lad gives presents of cured sausage to good children; the catch is that the sausages are made out of bad children. Sausage-maker counts children who are disgusted by the thought of eating their friends as “bad,” so he has a near-endless source of potential sausage candidates.

7: NIGHT-CACKLER. Night-Cackler finds the end of the world hilarious – must be a Yule Lad joke that non-Yule Lads don’t get – and he sits on your roof and cackles about it whenever you try to sleep. In an effort to keep up with the other new Yule Lads (as laughing is pretty benign), Night-Cackler also has a gun.

8: CORPSE-DANCER. Crawls inside the bodies of dead relatives and animates them, fooling you into thinking they’ve come back to life, before tumbling out of their arse and running away laughing. Corpse-Dancer is terrible at this (and can’t get the voices right) but it’s still very upsetting even if it is a bit amateurish.

9: SLEEP-DRAGGER. Drags you out into the wilderness when you’re asleep and leaves you somewhere exposed to die. Sleep-Dragger has a magic sack with sleep-sand in it that he sprinkles over your brow to make sure you don’t wake up, but he often runs out of sand halfway through a night’s work, so the remaining victims just get the bag over their heads and are kicked about a bit if they complain.

10: MURDER LAD. Artlessly but effectively arranges murders so it looks like someone the victim trusted did it, sowing mistrust and discord amongst what remains of the communities in the north. Works at night, prefers blunt instruments to sharp ones, and can be warded off by simply never sleeping and constantly watching one another.

11: TOOTH-TAKER. Steals your teeth right out of your head when you’re asleep. This hurts a lot but he has a little knife that he holds against your throat when you inevitably wake up, then he winks at you and theatrically makes “shhh” noises whilst yanking out half a dozen more.

12: ANGEL LAD. Sits on top of pine or fir trees and opens his mouth extra wide; a reddish spotlight shines forth and illuminates anyone attempting to hide from wild animals, monsters, opportunistic raiders or other Yule Lads. Angel Lad smokes stinking cigarettes that give him a terrible cough, which means that while he’s hacking up a half a lung you might be in with a chance of evading his searchlight.

Previous: D6 Horrible Ways to Die
Next: D6 Nightmare Florae And Faunae Of The Apocalypse