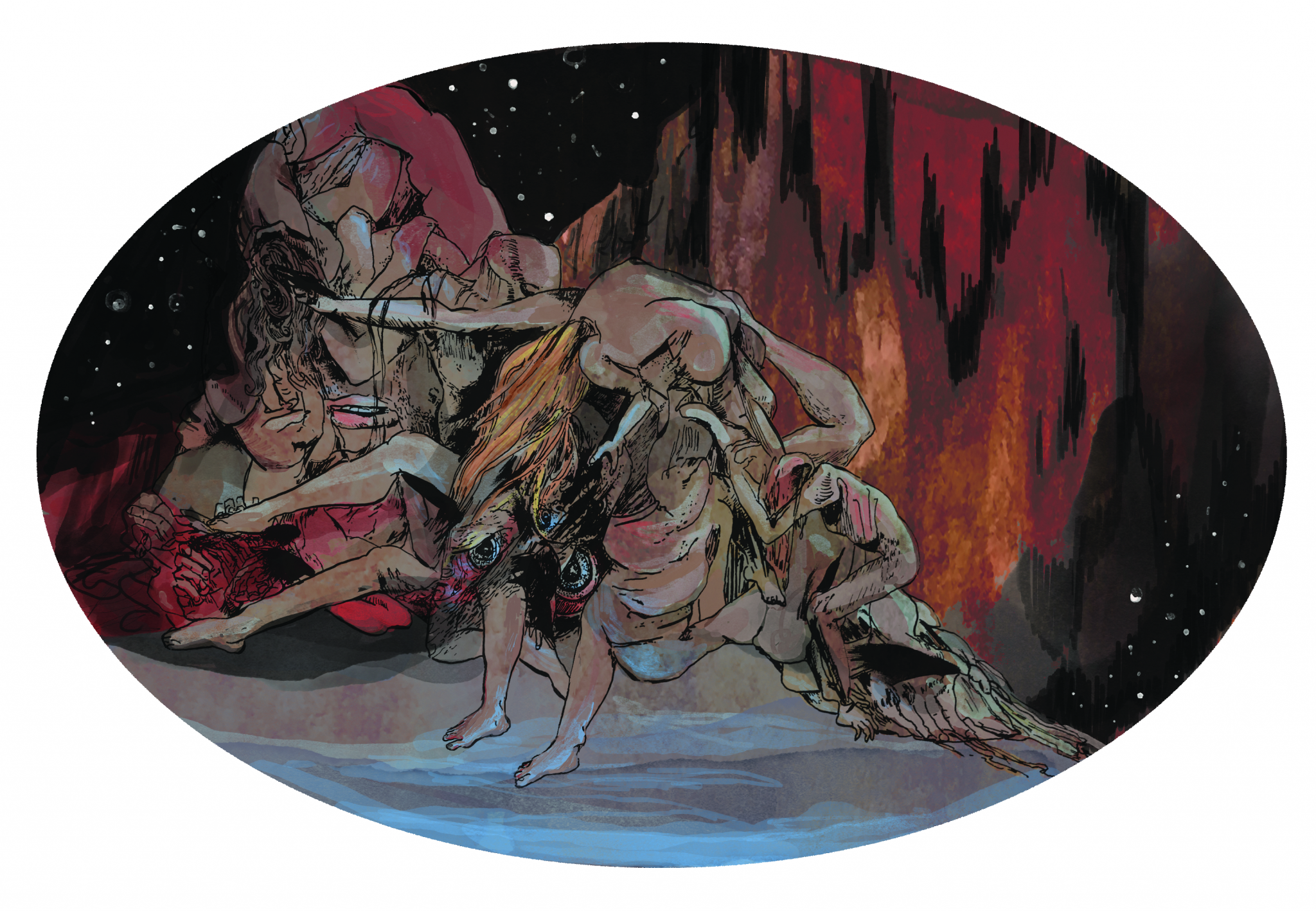 1: FLESH-ABOMINATIONS. Cast enough ritual spells as a group and something’s bound to go wrong eventually – usually it’s just memory holes and shared delusions, but the stakes are higher at the end of the world and there’s a lot of loose magic flying about looking to earth itself in some luckless occultists. Many of the cults that came to power as the First and Final God grew in strength have been reduced to shuddering, wretched piles of flesh and bone that crawl through shattered villages leaving a trail of red-black effluvia behind them, desperately searching for something to eat or at least a clean and final way to die. They’re not fast – anything but, really – but they usually have increased magical ability compared to what they exhibited before the transformation, and the spells they’re casting aren’t out of any book.

2. WIND-WOLVES. Legendary hunting animals of the gods, these are stiff winds that inflict damage and hunger for flesh in exactly the same way as a large wolf. They’re invisible and largely intangible (because they’re wind) but you can pin them in place with a metal spike, at which point they manifest physically and all you have to deal with is a large angry wolf.

3: SUNTREES. A pacifist earth deity, unwilling to directly fight against the First and Final God, has bestowed these strange trees on the world in an attempt to bring comfort to the beleaguered people on the forefront of the apocalypse. Each tree stretches at least a hundred feet into the air, their spiralling bark iron-hard to the touch and resisting any axe, and their creaking branches hang heavy with swollen, luminescent fruit. The trees themselves are warm enough to provide shelter from storms, but be sure that none of that fruit falls on you while you’re resting – they’re full of unadulterated life magic, which is powerfully carcinogenic to mortals.

4: THE SONG THAT ENDS THE WORLD. Don’t worry – it doesn’t actually end the world. The world’s going to end regardless of what tune you sing. But this mimetic virus spreads as a song, released into the world by the death-throes of a hubristic god of wizardry; when you sing it (and it’s hard not to once you know the song) the area around you is pitched further towards its undoing. [Once you’ve heard the song, roll an average Will save every few hours. On a fail, you’ve been humming it without noticing, and the GM rolls on an appropriately weird table to see what happened as a result.]

5: DOOM ELF QUEENS. The Doom Elves don’t mention their home lives much, because they don’t really have one – they’re summoned into existence as a side-effect of potential disasters. But who summons them? Doom Elf Queens, that’s who – flickering storms of burning gas, crystalline spurs and stuttering unreality produced by the explosion that created the universe, or as they view it, the worst and most important disaster on record. Things were much easier before existence got in the way. Indestructible and inscrutable, they have come to this world to witness the end of it, much in the same way you’d go down to the local park to watch fireworks. They have dressed up in local garb so not to alarm the indigenous inhabitants of this dimension, but seeing as they’re perpetual glitches in the fabric of reality, they’ve not done a great job of it.

6: THE SERPENT THAT EATS THE WORLD. This feathered reptilian nightmare is too large to comprehend; occasionally when you pass a valley or a fresh rent in the earth you can see a slowly shifting pattern of scales, pulsing impossibly huge beneath the world like sentient lava. It wasn’t planning on eating the world for another couple of millennia but here it is ending already, and it’s not about to miss its chance. In the limitless caverns beneath the world, the coils of it are tightening and writhing as it quests ever-closer to the surface to claim its prize; but not if the First and Final God destroys it first. It’s one of the few things big enough and mean enough to kill a god outright, but then you’ve still got a world-eating serpent to deal with, which is pretty much just as bad.