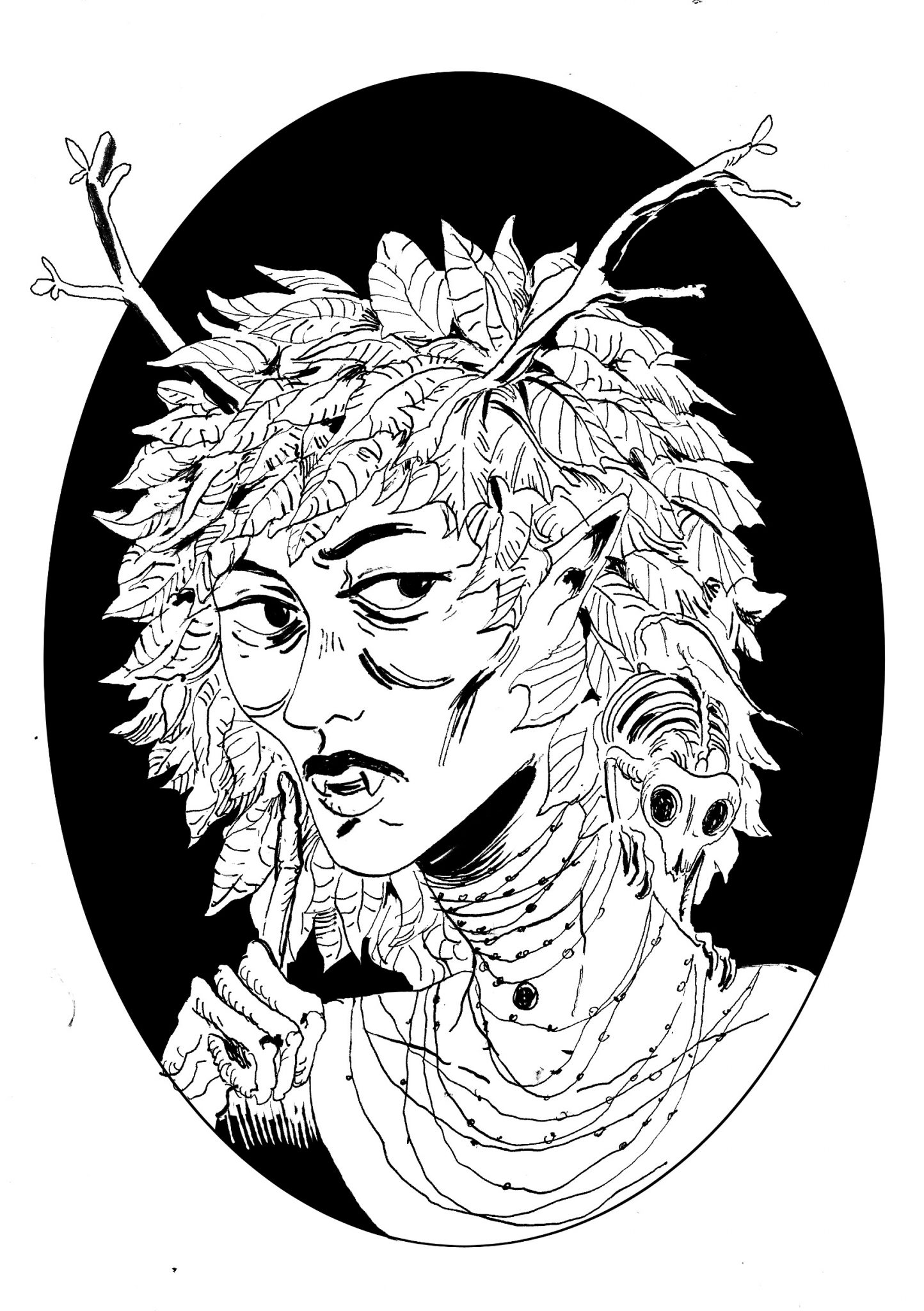 1: AUTUMN. Frantic and fractious Autumn, half-dead and gossamer-skinned, with ashwood bones and leaflitter hair. Their domain is least amongst the fae courts, but with spies everywhere; they bless you with secrets, knowledge, schemes and foresight. They are vicious and sharp in a way that Summer will never be; desperate and hopeful in a way that outstrips Winter; and wise beyond the grasp of gracious Spring.

[Once per session, declare that an NPC is actually in the pay of Autumn, and works for you now – or at least on the same side as you.]

2: HALCYON. Halcyon is a wine-drunk god of rutting and song; the kind they don’t make any more. He woke up this morning with a hangover that could kill a kraken at twenty paces and saw what sort of state the world was in, did approximately three minutes of thinking while he drank a coffee so black that light could not escape from the espresso cup it was stored in, and decided to sort things out himself. Reasoning that there can’t be any parties if there isn’t a world to have them in, he appears to you in a vision and offers you a drink from his celestial chalice – those who drink from it are blessed with a fortitude beyond that of mortal beings and a generally pretty chill outlook on things.

[When you get drunk and/or high (-1 to all rolls, cumulative until you sober up the next day) and have a bit of a party, heal all lost hitpoints. Whilst at a party you roll with advantage to bring other guests around to your way of thinking. Dead people, as long as they have a drink in their hand when the party starts, also heal all lost hit points.]

3. JONHUR, THE GOD OF TALES. There are few things better than a good story, and Jonhur knows this – so he’s looking for the sort of well-intentioned gang of vagabonds that would, in any good story, save the world from destruction. Your gang of vagabonds seem to be perfect for the job, or so he says. Full disclosure: you’re not perfect. You’re not the first gang of vagabonds he’s tried. All five of his earlier choices died in horrible accidents related to attempting to save the world. Jonhur would never tell you this (he’s a gentleman) but as you embark on your quest it’ll become clear that you’re not the first people to get torn to shreds in this temple and you probably won’t be the last.

[As long as you don’t resolve your central conflict, you can’t die – it just doesn’t make any sense. You always cling on to life due to your plot armour. (This is actual armour that he gives you – usually a helmet.) However, if your central conflict becomes unclear or unexciting, you take double damage from all sources until you get a proper plotline. Jonhur is forbidden from explicitly coaching you but will do his best to set you up with interesting lives.]

4. KYGERACH, MAINTAINER GOD. “It’s no fun being the central god out of three – one gets to do all the creation, one has the catharsis of destruction to look forward to, meanwhile muggins over here is stuck spinning cosmological plates and performing patchwork repairs on the universe. And now the world is ending! Not on my watch, sunshine.” Kygerach is a once-calm maintainer deity who isn’t about to let the world end now, just when things are getting good. As such, they’ve thrown open the vaults of heaven and are giving out god-killing (or at least god-injuring) weapons and armour to those that they reckon are in with a shot of kicking the snot out of the First and Final god. Get in there quickly before they change their mind!

[Open the DMG, pick out three magical items each – any of ‘em, doesn’t matter – and write them down on bits of paper. Draw two randomly from a hat. Enjoy your new equipment – it’s soulbound to you and you can’t trade it away. Kygerach is an equal-opportunities god and honestly easily tricked, so the remaining magic items are distributed amongst any mortal rivals you have at present.]

5. THE WINTER COALITION. Mother Winter, calculating and cruel, a craftswoman beyond compare. Dregr, hoary pig-man of the deep forest, laden with steaming gifts for young children. Jack, prince of snow, whose breath is a sudden squall and whose hair is a sweeping drift but who still manages to look pretty good in a waistcoat. Little Lost Holly who stalks the frozen backroads looking for a man to keep her warm. This rag-tag collection of gods, supernatural creatures, creatures from myth and embodied elemental forces all have one thing in common: Winter. They were under the impression that the fourth season was supposed to be their domain, and now this Johnny-Come-Lately (or Johnny-Come-Originally, depending on who you believe) First and Final God is stomping around demanding that it’s theirs. In an attempt to even the odds, they’ve (mostly) put aside their differences and teamed up into an unprecedented super-team of chilly immortals and are actively recruiting heroes to fight on their side.

[You are no longer harmed by becoming too cold or too hot; you can walk through the strongest blizzard shirtless without discomfort, or plunge your hand into molten iron and suffer no ill-effects.]

6. THE SPITEFUL ONES. The First and Final God had children. Not in the normal way that people have children; it’s more like it made smaller, flawed versions of itself without any interference from anyone else and sent them off to die in experimental attacks against whatever primordial forces occupied the world at the time. It felt no remorse over this; it doesn’t do remorse. It doesn’t do emotions, except perhaps hate, but that seems like too small and too human a word for how it behaves with respect to warmth and life.

Anyway: the kids. Not all of them died. Some of them hid away in the dark places of the world, and learned, and understood that their purpose in life was to die so their creator could gain an edge over what it perceived as its enemies. They didn’t like that, so they teamed up and killed The First and Final God – or brought it as close to death as it could get.

Now: it’s waking up from eons of a death-sleep, and they’ve gathered together to kill it again; a ramshackle collection of dusty angelic figures, missing limbs and teeth and eyes, having spent an eternity in hiding. It’s stronger than ever and they’re old, and tired, and imperfect, and desperate. They turn to mortals for aid and know in their hearts that, even if it works this time, they have another eternity to wait out before it happens all over again.

[Each member of the party gains a companion – a withered godspawn, monstrous and ancient, roughly assembled into a humanoid form. They phase in and out of reality as needed. When they aid you, you roll with advantage when you act against the First and Final God and its mortal servants. If you ever roll the maximum result on both of your dice, the companion is slain after the action is resolved.]

Previous: D6 Nightmare Florae And Faunae Of The Apocalypse
Next: D6 Items That Could, Theoretically, Avert The End Of The World