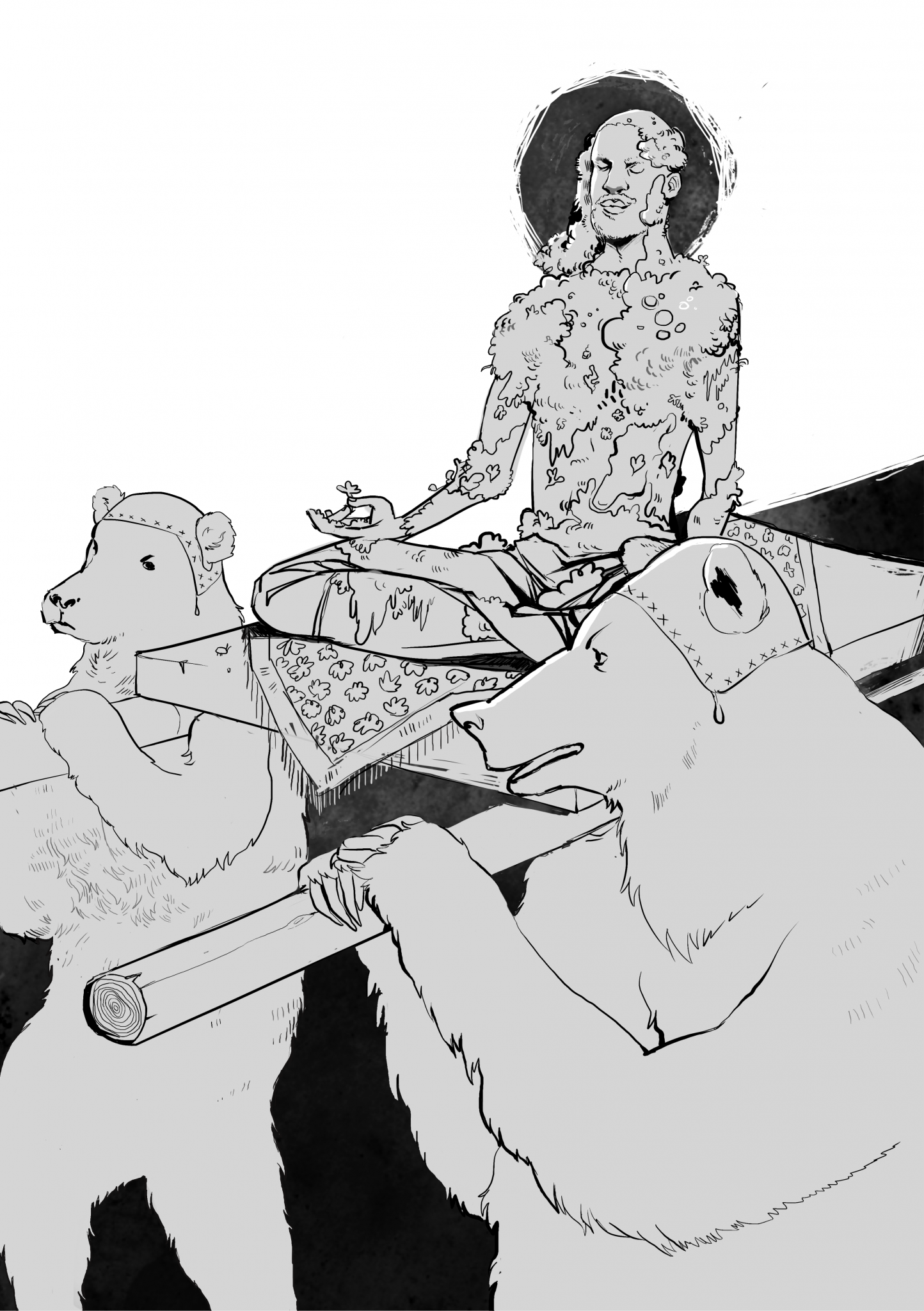 Seems like something’s happening up north; there’s a wide variety of people and creatures moving down through the thick forests and mountainous regions and out into the plains that lead to the southern seas. Who, or what, is crossing your path today?

1: GOBLIN PILGRIMS. These goblins are freezing, and they’ve absolutely had it. They used to worship “The White,” which is their name for an ancient frost god, but it stopped listening to their prayers and they started freezing to death so they did a schism, killed their High Priest by kicking him into a big hole, and started worshipping the concept of sunlight and warmth instead. They’re on a pilgrimage to the desert, which they’ve heard tell of in stories, where it never snows at all. They need help getting onboard a boat across the ocean; the new High Priest offers blessings of warmth and heat in exchange for assistance.

2: THE FIRST ONES. You’d heard stories of people who split off from society thousands of years ago and went to live in the woods – or maybe they never left the trees after their cousins started building houses and lighting fires. Whatever happened, they’re here now. Their bones look heavy, their bodies are mostly covered in thick dark hair, and they wear the uncured pelts of animals they’ve killed for warmth. They don’t speak any language you recognise; if you find a way to talk to them (magic? Charades? Magical Charades?) then they speak of the rancid stink of something long-dead crawling over the land, and a frantic desire to get away from it.

3. THE UNDYING LEGION OF KING SVALBARD. King Svalbard ruled the North centuries ago, and when he died, he was buried with the corpses of his most trusted soldiers. (Some of them weren’t corpses when he died, and had to be encouraged along by the usurper Queen Janmayen.) Legend was they’d rise from their graves when he returned to unite the North – but they got bored of waiting, and the King hasn’t moved in several hundred years, so they kicked out the doors of their mausoleum, grabbed their rusted swords and armour, and shambled down south to work as sell-swords instead. They’re good fighters, even if their bits keep falling off, and anyone with a working knowledge of ancient runic poetry can hold a half-decent conversation with them.

4. KENNING-WOLVES. When these wolves taste the blood of something they’ve killed, they learn the trick of speaking that thing’s language (or whatever they use instead of language to communicate). The older the wolves get, the more languages they can speak. This one is ancient, scarred, the size of a horse and speaks in a faltering but effective common tongue, implying that she’s only started eating people fairly recently.

5. THE STATUE DRUID. Looks like this guy calcified into a cross-legged statue ages ago – there’s moss and lichen growing all over him. He’s carried around on a badly-built litter by four bears (dangerous ones) who are currently working out how best to take food from the town as they depart for warmer climes. The druid himself is a magical artefact that miraculously heals wounds [restore 2D6 HP or gain D6 THP once per day when you touch him] but the bears don’t want to let you near.

6. THE MOUNTAIN WITCH. She used to live up in the mountains, but she’s moving south “for the winter,” as she says. She’s brought her entire house with her by sticking legs to the bottom of it and having it walk. You’ve heard of houses with giant chicken legs before – this one just seems to have lots of normal-sized legs, mainly taken from elk and moose. She sits on the veranda and smokes a pipe, and is willing to teach old stone-magic to anyone who’ll bring her curiosities and endure the (deliberately) long-winded stories of her youth while she stays in town. She leaves after a week or two; her house waddles off into the river and swims away, leaking slightly through the floorboards.