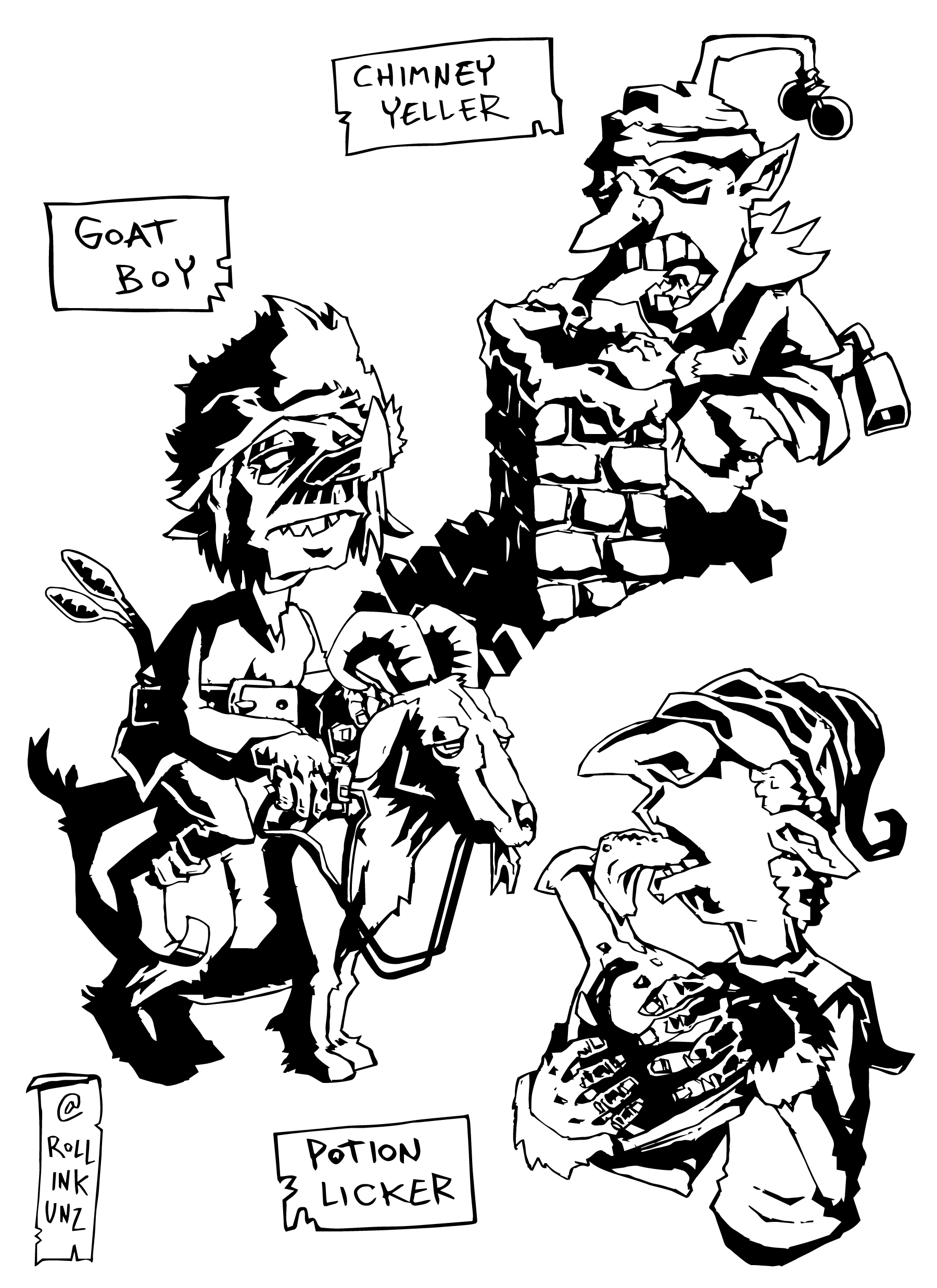 The Yule Lads appear during the festive season and get up to all sorts of mischief – they’re a cross between fairies, goblins and the shorter variety of elf. Most of them aren’t directly harmful, but they certainly cause trouble. (You can learn about traditional Icelandic Yule Lads here.) Roll a D12 to see which Yule Lad is in effect every morning throughout the festive period.

It is certainly possible to track down a Yule Lad, but most attempts to exact retribution for their mischief will end up going awry – they have a supernatural protection (a 95% chance to evade damage, as long as they’re running away) and any attack they evade inflicts half its damage on their would-be attacker. A successful attack flat-out kills them. (You monster.)

1: Potion Licker, who tongues around the tops of your potions when you’re not looking. In addition to getting his horrible spit all over the bottle, he halves the effect of your potions when drunk (so healing potions restore half the amount of hit points, invisibility potions last half as long, etc).

2: Coin Chewer, who steals D20% of your carried cash and chews it up then spits it into a hole in the woods. Coin chewer has big flat teeth that he uses to mess up your coins, and the more valuable the coin, the better it tastes to him.

3: Little Wizard, who swaps an item’s enchantment for another enchantment and then swaps the original enchantment with a third one and before you know it the whole town’s in uproar. 1-in-6 chance that he’s swapped out an enchantment for a random one while you were sleeping.

4: Door Shuffler, who rearranges doors so they open somewhere else. 2-in-6 chance of it happening every time you open a door that hasn’t been opened since last night. The effect wears off after an hour or two but is liable to trap you in your house if your front door will only open into the spare room upstairs.

5: Hole Taker, who steals holes, even when they’re meant to be there (donuts, keyholes, archways, buttonholes, etc) and replaces them with more of whatever it is that the hole is in. Has a bag full of holes that he will jump into to escape if cornered, which rarely works.

6: Goat Boy, who rides goats around and leads them into mischief. Not a huge problem if you don’t own goats, but having one break into your quarters and eat your bedclothes is less than ideal.

7: Tune Thief, who steals your ability to sing and has an incredible voice. (Not his own, probably.) If a bard has their singing ability stolen by Tune Thief, they can’t cast spells until it wears off (a couple of days at least) or they track him down and get it back. While Tune Thief has your voice, they can cast all the bardic spells you can.

8: Chimney Yeller, who yells down chimneys. Real piece of work. Wakes up the kids.

9: Key Taker, who is building a shrine out of stolen keys somewhere deep in the forest. If you have a key, he took it; the shrine is intended to open a door to the Yule Lad Dimension, which Key Taker would be heartbroken to find out doesn’t exist.

10: Goose Lad, who artlessly disguises himself as a goose and tries to blend in; this upsets the geese. This happens at the worst possible time for you. A flock of upset geese inflicts D4 damage if you end your turn within its area of effect.

11: Wand Fiddler, who expends charges from your magic items when you’re not looking. 1-in-3 chance of him firing off a charge into something exciting while you’re resting; if he’s spotted, he’ll run off and there’s no need to roll again until you next rest.

12: Gift Hustler, who swaps gifts he finds with the gift he’s holding in the hope of “winning.” Not entirely clear what he hopes to win, what the conditions are, or whether he knows you’re supposed to open the presents.