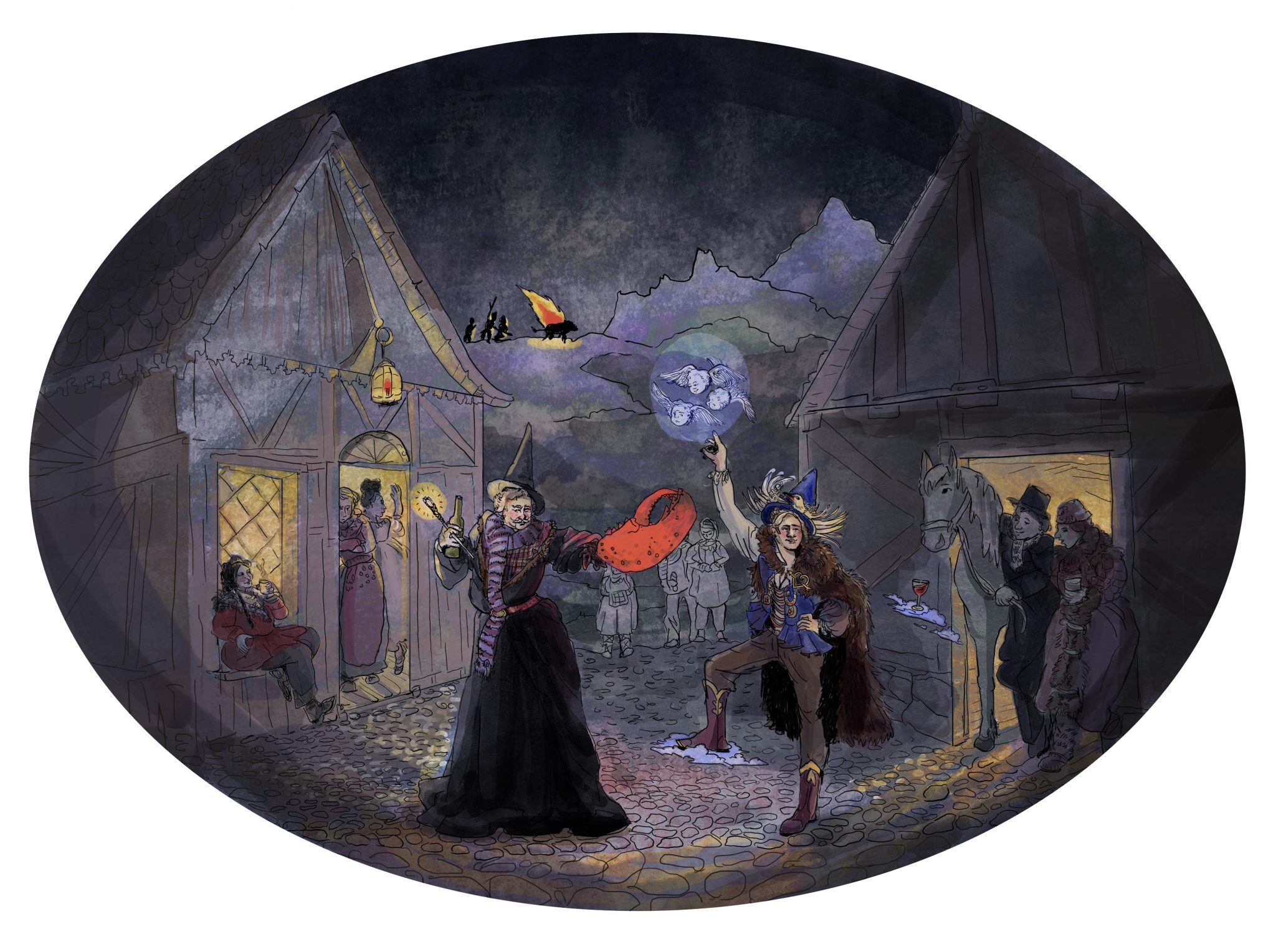 1: GREASED DIREBOAR HUNT. Direboars – great big wild pigs with spiked hides and a bit of infernal blood in their ancestry – are more popular than most people would like around sites of ancient but low-grade evil, like the Obsidian Scrape or the ruins of Raven’s Rest. After a few generations of catching greased hogs, the young folk in the region became bored of it, and decided to up their game by greasing a direboar and trying to catch that instead. A fun side effect of their demonic ancestry is that direboars can’t be hurt by fire, so a few enterprising lads run entirely illegal after-hours hunts where the beasts are set alight and hunters in thick leather and damp rags attempt to wrestle them to the ground. Which is all well and good until one of them manages to reach the town and set something on fire, but they’ve been okay up until now.

2: SKY TOWERS. Each family (and family is a broad term in this instance) is given space in a clearing on the outskirts of town to build a sky tower, which is a tall, thin structure made of sticks, logs, wicker and branches – the family with the tallest tower at the sunset wins a big jug of cider and some sweets for the kids. After they’re all built, some places burn them and sing songs, but that really depends on how flammable their town is and how drunk the participants are. Sabotage of other families’ towers is expected, but nothing past stealing a few branches or “borrowing” a ladder – any sort of damage to another teams’ tower is frowned upon.

3: TREE HUNTING. Most houses have a fir or pine tree somewhere in their houses over the festive season due to an ancient argument between the region’s King and a forest spirit, and it’s important to let the forest spirits know who’s boss. Some folks even humiliate the tree by dressing it up in stupid baubles – a mockery of fruit! – and sing insulting but tuneful songs to it whilst gathered around the fire. The biggest and best trees to bring home and make fun of are clever, mobile, and evade capture in the deep woods by coordinating with barbed dryads and explosive pixies. But: the Baron of Salen gives out a handsome reward for the “best” tree brought before him on midwinter’s night every year, so bands of tree-hunters arm up and descend into the lightless forest to try and bring home a choice catch.

4: ST MARTHA’S PILGRIMAGE. Bit of a misnomer: St Martha is a whacking great boulder of dubious spiritual importance that the inhabitants of Salen keep in one of two temples on hills at opposite ends of the town. At the end of the first week of Winter Festival, they get a few drinks in and then move her from one temple to the other – this is hugely dangerous even in optimal conditions, but here we are. More than one house in the shadows of the temples has been “blessed by St Martha,” which is to say had a chunk of wall taken out by a massive boulder that rolled down a hill.

5: THE RIDDLING PIG. A farmer brings a pig to the market square and everyone tells it riddles; the best riddle gets the pig, usually butchered, sometimes alive. It’s said that all the riddles make the pig unusually intelligent, so unlike your average pig, it can function as a wizard’s familiar if desired. [It’s no more intelligent than any other pig in terms of following orders and it certainly can’t talk, but you can do spells through it, and no-one suspects a pig.]

6: WIZARD-BAITING. It’s common amongst young people during the festive period to propose that any wizard they meet is a rubbish wizard and could never do even a single spell – then the wizard has to prove them wrong by doing some entertaining magic frippery. That isn’t Wizard-Baiting – Wizard-Baiting is the grown-up version of this where you get visiting wizards drunk and try to convince them to fight each other in a spectacular display of magic in the pub coach park. Sometimes people bet on the outcome but really it’s just about watching the show.

7: WOLFSNACHT. Everyone howls throughout town on wolfsnacht; it’s a means of communicating with one another, and it’s considered good practice to pick up and repeat a good howl. The hoary old village elders know all the secret meanings of the howls, and most people know how to say a few things (like “we’re drinking here!” or “I got married this year and I want everyone to know” or “anyone fancy a kiss?”) or maybe their own name. It’s dying out of fashion, really, and most of the kids these days are just howling any old bollocks. Anyway: a village elder approaches you, your throat sore from yelling, and tells you that someone is howling something pretty evil out there – they’re using Wolfsnact as a means of communicating to coordinate several dark rituals all at once.

8: SKY IDOLS. As sky towers, above, but: it takes place in the dead of night, over the hill and out of sight of the town, and you don’t bring the kids along or give away free cider to anyone, and instead of building towers you build wretched goat-man idols with cruel eyes and beards of briar and thorn, and you always set them alight and you watch silently to make sure that they’re burned away to nothing, and you spit and curse the name of The Bastard Winter to drive him away for another year.