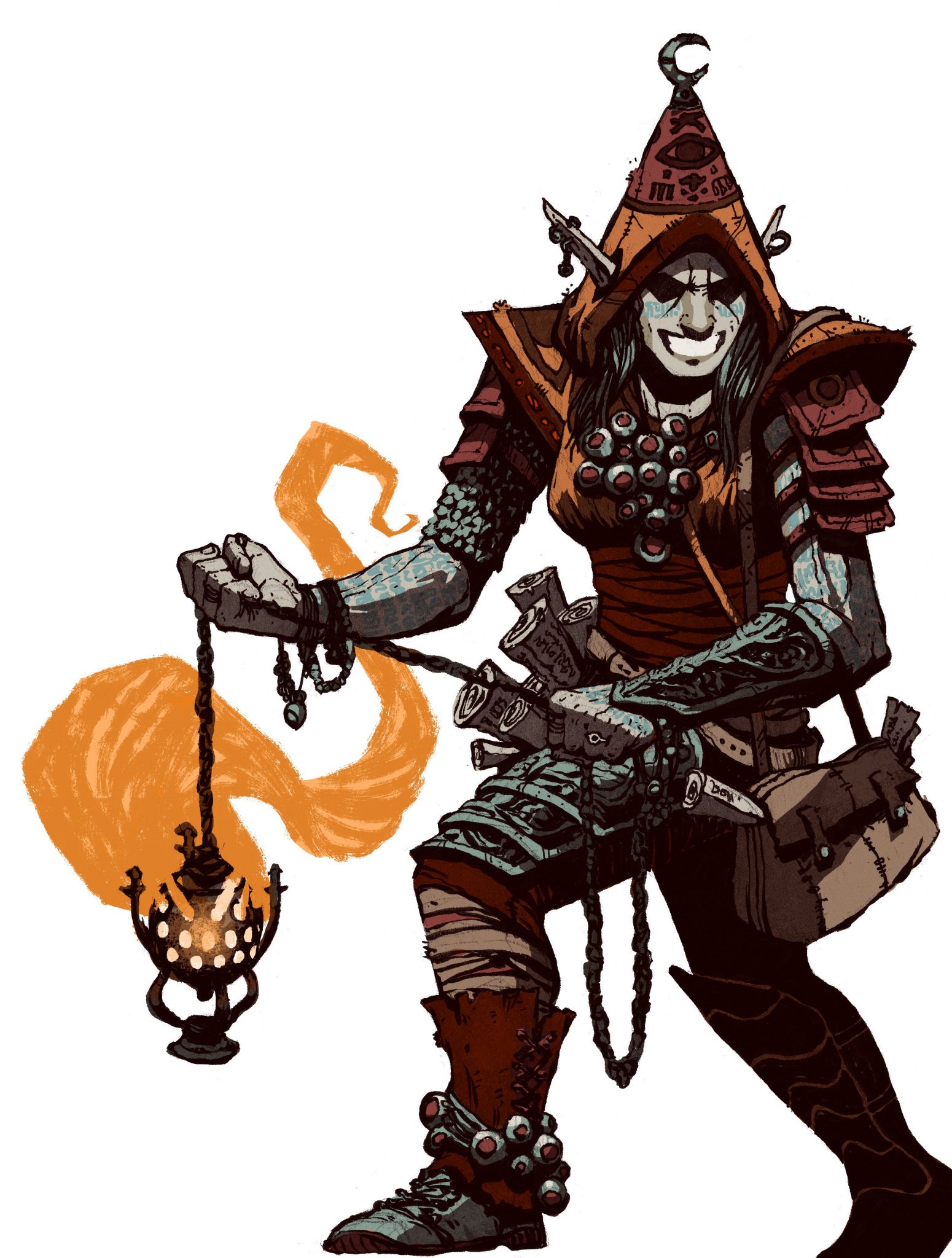 This is the first of several class breakdowns where we’ll take a look at each class in detail throughout our Kickstarter campaign. Up first: the Heretic.

Followers of a twice-forbidden goddess, the Heretics are the disciples and descendants of those drow forced out of the City Above centuries ago for their faith. Having turned their back on the changeable moon above, they worship the Moon Beneath – a glorious and fecund mistress who offers great miracles and blessings to the faithful. Unlike the one in the sky, you can walk to the Moon Beneath and receive its scintillating wisdom – if you are strong of faith.

The Heretic’s core ability is a classic one when it comes to clerics – they can hold a ceremony once per delve to remove Blood and Mind stress from their allies. We see the Temple of the Moon Beneath as a crucial organisation in the Heart who provide succour and guidance to hundreds of pilgrims every year, and to get across the fact that even if player characters aren’t ordained priests, they can still take part in the community-building and restorative aspects of organised faith.

Channelling the power of the gods can feel a bit clean, sometimes, in roleplaying games – so we wanted to muddy the waters a little and see if we couldn’t make one of the classic dungeon-crawling classes, the cleric, a bit creepier.

So: the Heretic can speak in tongues and inflict stress on anyone who hears it, including their allies (so get ready with the wax ear plugs), or they can shift their consciousness into the realm of the supernal to see peoples’ souls through solid objects. Their most mundane power – FULL MOON SHIELD – makes them into a solid tank character, allowing them to hold their own in fights as well as lending protection to their allies. But even then, the shield they carry is covered in eyes, and it lets them see in pitch blackness.

The Heretic starts play with either a burning censer (depicted above), a double-barreled shotgun, or something called a “Relic Bludgeon.*” We picked these because they’re all over-the-top cool, which pushes them out of the traditionally passive role of a cleric and into something more active and strange.

Zenith abilities are tied to Zenith beats – the culmination of your calling’s story unlocks the most powerful abilities attached to your class, and while most of them will kill you in the process, they give you enormous power.

The Zenith abilities of the Heretic look at what happens to frail mortal bodies when you run divine power through them – they’re changed utterly. GODDESSES THREE, for example, gives you the capacity to come back to life after death twice – but the third time you die, you become an avatar of the Moon Beneath, and cause terrible destruction. MINE EYES HAVE SEEN THE GLORY makes your face impossible to look upon without causing madness and spontaneous miracles, and in Spire far above, word of your majesty reaches a special order of Paladins who will hunt you down and kill you within a month.

Something about the way that it handles cosmic horror really appeals to us; it’s got a human element, and we see the unknowable through the very knowable lenses of obsession, desire and pride. Plus it’s coy about it too, and for at least half of the game it seems like it might be about werewolves rather than a big star cthulhu, so it makes for an exciting reveal.

We tried to channel some of the weird into the Lajhan abilities – the moon priests of Spire who are very much the forefathers of the Heretic – but it was tempered by the way that they had to use said abilities in a crowded city. With the Heretic, we got to let our hair down a bit and see how weird we could get.

We’ve drawn the line at silvery-grey tentacles and needle teeth as far as their abilities go, but don’t let that stop you from including all sorts of horrific “blessings” in the form of Echo fallout. The Moon Beneath is generous with her gifts.

*We’re not sure what a relic bludgeon is, to be honest. I imagine it as a stone plinth with wraps of cloth around it to make it easier to wield; it could be the fingerbones of a saint built into a heavy-duty reliquary, or a silver-plated statue wrenched off the front of a rival church’s lectern. Whatever it is, you can mark stress to Mind to commune with it and roll with mastery in combat, and I really like the idea of the Heretics being so mad and righteous that they rock up and hit you with bits of their own temple.