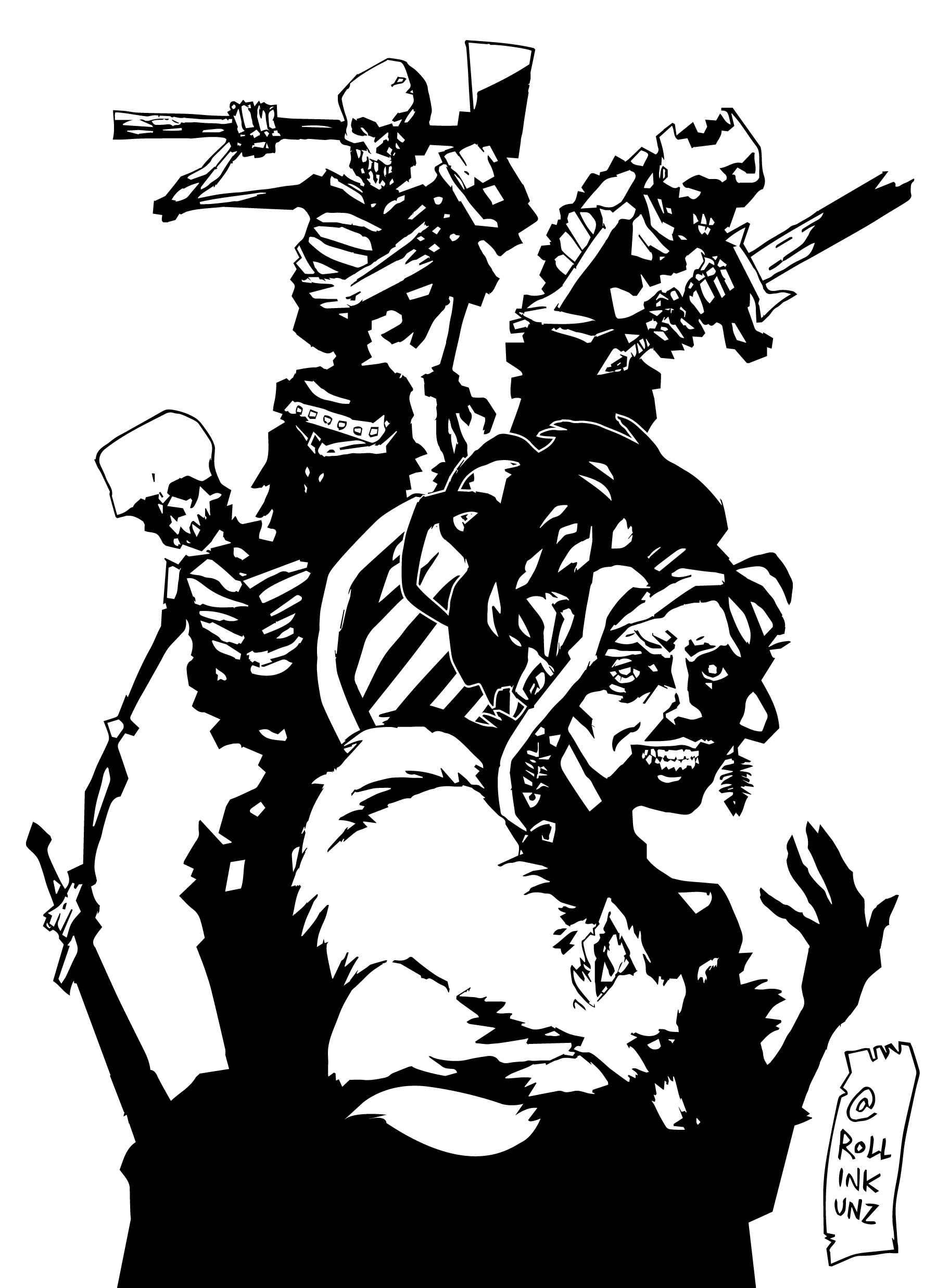 1: CLENCH HARDWHISTLE, a Big Damn Hero and a level thirteen fighter (he states this aloud in the street to anyone who’ll listen) who’s never met a problem he couldn’t stab to death. Clench is unaccompanied but has a magical talking sword that acts as a sidekick – the sword hates him, but can’t leave and wouldn’t ever dare speak out against him when he could hear in case he uses the Punishment Scabbard again. Likely cause of death: frozen solid attempting to stab a blizzard.

2: VENERANCE SKALL, who’s technically an evil necromancer but it’s the end of the world so the overall standard for heroes has been significantly lowered. Venerance is leading an army of skeletal thralls that are immune to the freezing cold – she started with her family burial plot and travelled north, following visions delivered to her in dreams of torment, picking up or creating large amounts of corpses en route – and, bundled up in magically-warmed fox-furs on a sled pulled by six undead wolves, she intends to strike at the heart of the eternal winter in the north and kill it. What she does after that isn’t super-clear, but people aren’t asking too many questions so long as there’s a person in charge of the north, rather than the First and Final God. Likely cause of death: stabbed by eight skeletons during a labour dispute, causing her entire army to collapse at once.

3: BRILLIA GOLDTOWER, a shiny paladin with good teeth and better hair, acting as a representative from The Great Harvest Temple in lands far to the south. Driven by visions from her god, she has gathered together a people’s crusade made up of malnourished but terribly faithful farmers armed with improvised weapons, glory-hungry noble scions eager to earn a place in heaven, and a dubious selection of adventurers who believe that if the First and Final God is this powerful then it’s probably got something worth stealing. Brillia is a good egg and has a kind word for almost anyone, and really makes you think that this Harvest Temple lark might be worth looking into. Likely cause of death: drowned after heavy armour caused ice covering frozen lake to crack.

4: FRANZISKA, an ingenious red-headed burglar with a heart of gold, leading a gang of legendary thieves to steal the Winter’s Heart from the peak of Svartfjell. (Her compatriots are: Dwarven mountebank Brigham Goldtooth, half-ogre spellthief Krug Etherbreath, master lock-picking gnome Honks McCavity and the reformed abyssal cultist Erebus Wardshadow.) Likely cause of death: temple collapse.

5: HAUNCH MERRYWEATHER, chosen of the Summer Court, a permanently shirtless and perpetually well-lit man with a big hearty belly, bulging muscles, and chest hair you could bed down in for the night. Haunch has never been cold in his life, even in the midst of a driving blizzard, and to be honest he can’t even imagine what it would feel like. (He’s not tremendously bright.) He’s heading up a collection of kissable sprites and elegantly-dressed feybloods on a last-ditch mission/sexy cross-country party to seal the arctic rift shut before the First and Final God overwhelms the world. Likely cause of death: betrayal by Autumn Court double-agent.

6: THE BEAST, technically a collection of about fourteen druids who have soul-bound themselves to each other allowing them to transform into a huge and protean monster easily capable of eating an elder kenning-wolf whole or giving an angry frost giant a good run for its money. Outside of beast form, the druids are rapidly coming apart as the soul-binding process has given them unwanted access to each other’s memories and thoughts leading to no end of arguments. They don’t have a leader – but the one of them that does most of the talking to outsiders, Derenthal, is looking for a way out of the group or some way of silencing the thoughts of the other members in his head. Likely cause of death: massive cardiac arrest as giant heart attempts to beat in fourteen different patterns and gives up.

Previous: D6 Cults Who are Attempting to Curry Favour with the First and Final God
Next: D20 Signs of the Apocalypse