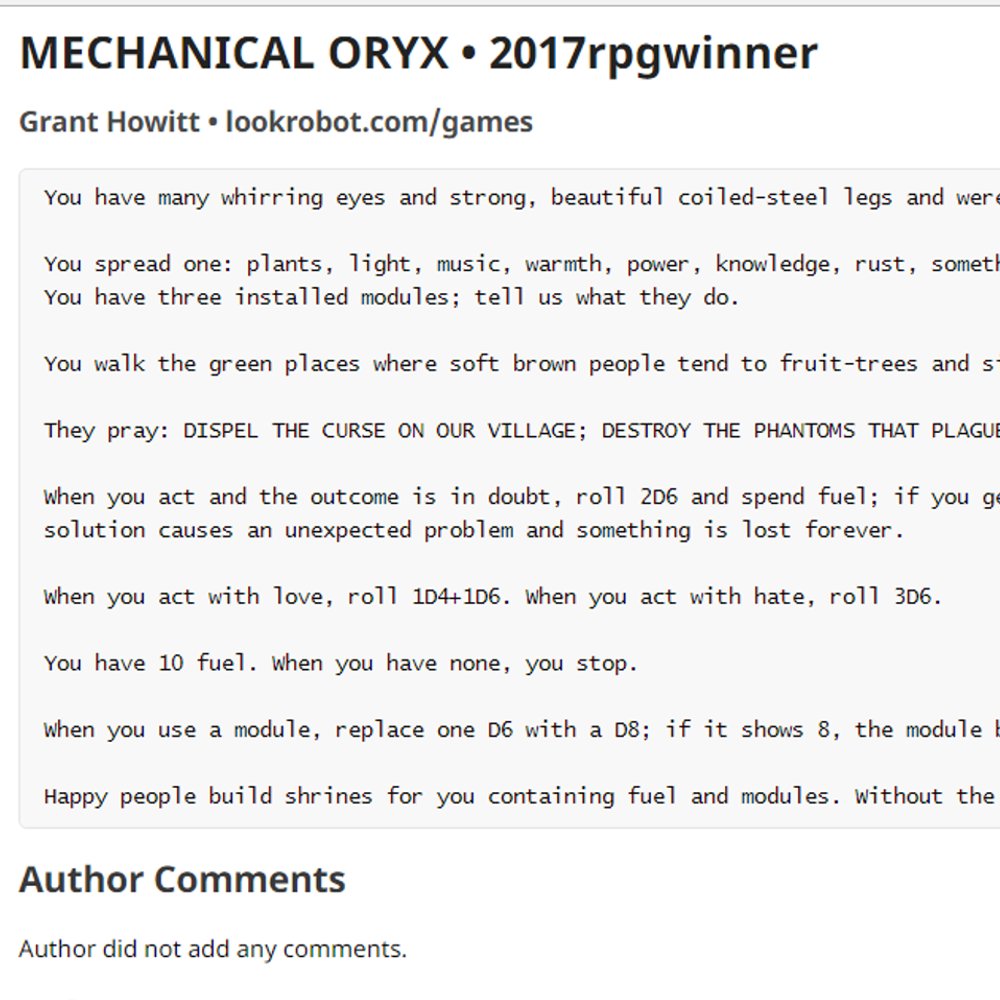 The 200 word RPG contest is a cracking yearly challenge, run by the selfless David Schirduan, in which – well – entrants must write an entire roleplaying game using 200 words or fewer. Seeing as I write one-page RPGs quite literally for a living, I felt like it wouldn’t be fair for me to enter, and that I should make room for new and upcoming authors in the industry to showcase their work.

Then I went on holiday and wrote MECHANICAL ORYX while everyone else was at the beach because I’m a big saddo that hates fun, and it turned out pretty good, so I went ahead and submitted it – and it won, which is nice! The other two winners (there’s no “first prize” as such, but instead three joint top entries) are both rather serious and, to be honest, fairly moving art pieces about soldiering in modern Afghanistan and the onset of dementia while you’re abandoned by your family, neither of which are a fun time to spend an evening but both of which are fascinating topics to write a game about.

You can see MECHANICAL ORYX and all the other entries on the 200w RPG official website. Alternatively, because it’s only 200 words, I’ve reproduced it below:

You have many whirring eyes and strong, beautiful coiled-steel legs and were made long ago when the cities still stood.

You spread one: plants, light, music, warmth, power, knowledge, rust, something else. The longer you stay in one place, the more intense it gets. You have three installed modules; tell us what they do.

You walk the green places where soft brown people tend to fruit-trees and sing songs they don’t understand.

They pray: DISPEL THE CURSE ON OUR VILLAGE; DESTROY THE PHANTOMS THAT PLAGUE US; TEACH US THE SONG THAT MAKES THE FRUIT GROW.

When you act and the outcome is in doubt, roll 2D6 and spend fuel; if you get seven or more, you achieve your aims. If you roll a double, your solution causes an unexpected problem and something is lost forever.

You have 10 fuel. When you have none, you stop.

When you use a module, replace one D6 with a D8; if it shows 8, the module breaks.

Happy people build shrines for you containing fuel and modules. Without the shrines, you will become a dangerous, scavenging thief: a phantom.

I’m really happy with how it turned out (and I liked the other finalists too, especially Five Cards) but something that strikes me – with my game, and with the others as well – is that these games aren’t generally the sort of thing that you’d play on a given evening if something was available. I think that, in the same way as Game Chef or Threeforged, RPG design contests with such tight constraints produce and celebrate pieces of art, rather than pieces of craft – games that do something interesting and curious rather than the sort of thing that’ll keep you coming back for more and more. I’d go for playing D&D over pretty much any 200w RPG you care to mention, and I reckon that most other people would say the same.

Which is fine, of course. We don’t need another Dungeons and Dragons (despite what many, many fantasy heartbreaker authors seem to think) but as an art form we can always do with more people pushing the envelope and seeing what games can do. I suppose, given the presentation, is that these games primarily exist as texts rather than experiences, in that they’re imagined and extrapolated upon rather than played. (Which is why my game did well, I think: the worldbuilding is there, but just enough to get you to start asking questions about why on earth robot antelopes are helping people to grow fruit in, what, a post-apocalyptic setting?)

Anyway. If you play Mechanical Oryx, let me know, yeah? I’m curious to see if it actually works.